The Instinct for Survival (and the tale of two cats)

When the brown bear was charging, a million thoughts went through my head. Mostly, stay put. Do not run (Trust me, harder than it sounds! Every instinct said to run!). When I found myself lost in the talus, trying to find my way back to a goat trail, it was tempting to hurl  myself down the steep slope with abandon rather than carefully scan the landscape for where that trail would be and slowly inch over to it. When the mountain lion stalked my camp, the impulse to scream and run was overpowering. For some reason, I did the right thing. Luck, or survival instinct? The same impulse has turned me around from rivers that should not be crossed, snowfields that were unstable, or urged me forward in other times when things only looked threatening, but turned out not to be.

I've never been in a life or death situation (well, maybe the bear counts), where I had to rely on determination for hours or days to stay alive. Hopefully I never will be. But it fascinates me to read stories of survival, when others in the same boat (sometimes literally) gave up. Would I have that same will to survive? Would you?

Animals have more of a survival instinct than we do.

This is Scout. He is one and a half years old. 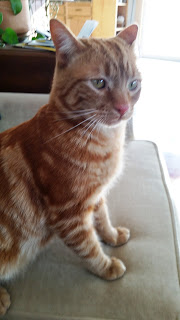 When Scout was so little he could barely walk, his eyes still blue, (probably 2 weeks old if that), the owner of the barn in which he was born found him crawling into the yard. She put him back in the barn (lots of barn cats live out their lives in this county. It's a tough life). She noticed he crawled out again. The third time, she realized something was wrong and investigated. There were five abandoned kittens, their mother having left them for an unknown reason.

Three kittens quickly died, despite her best efforts to feed them with an eyedropper. Scout and his brother responded and began to grow. We babysat both kittens, feeding them with a bottle and holding them in our laps for hours. Scout was definitely the most determined to live. His brother seemed less sure.

Eventually both kittens made it (you have to teach tiny kittens how to pee. Don't ask). I adopted the black and white one, now named Puffin. Scout lives happily with another friend. It's only because of Scout's will to survive that I now have one feisty cat who does things like chase deer out of the yard.

It makes me think. What would you do to stay alive? Would you be willing to take a big risk to save yourself and others? A man I worked for was mauled by a grizzly while on an outing. He said he saw husbands push their wives aside so they could climb higher in the tree. Everyone abandoned him to save themselves (he was a child and his parents were not there. To be fair, it sounds like it was chaos). When I worked for a short time on a recue helicopter, people ran the gamut. There were those that folded and others who were brave. Of course, we all hope we are the brave ones.

Puffin would have died if his brother hadn't had the will to survive. I think about that a lot. Hopefully none of us will ever be tested to a point where we have to find our inner steel, but it is something you take on when you go to the woods. May we all make good choices and live to roll around on the carpet another day.