I still remember the twenty year olds who paraded past my desk when I happened to be perched at it, back in Alaska. "I could never have a desk job," one said, wrinkling her nose. I wonder if, ten years later, she has realized what I have: that I'd rather save my hard workouts for my own time instead of on the job. I know too many friends now who are battling the results of years of wielding rock bars and carrying heavy packs. If I am going to face arthritic knees and strange aches, those are going to be because I chose my activity, not had someone tell me to do it.

That being said, a desk job is not my ideal reality. Except, sometimes, I get to go see projects in the field before they happen. This one happened to be on the PCT, just south of the section I had completed a few weeks earlier. We were in Northern California and it was hot, one hundred and ten. I gazed longingly at the trail, wanting nothing more than to load up my pack and head north. The hikers we saw looked so comfortable, at home in the woods.

"Why do you like this trail so much?" my co-worker asked as we strolled along, dodging thru hikers.  He looked less than enthused about an uphill section. It's just the idea of a continuous footpath from Mexico to Canada, I tried to explain. The hikers going by are part of my tribe. We gave a ride to one who had run out of money and enthusiasm. He wanted, he explained, to stop sometimes. To swim. To hang out.
We traveled along the McCloud River, with swimming holes galore. I looked regretfully at each one. I was working, and I had to appear professional. But still... 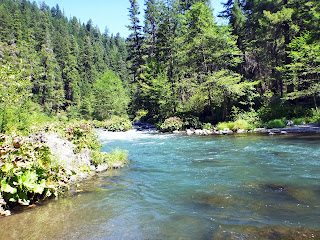 There's just something about water that makes me want to get in it. 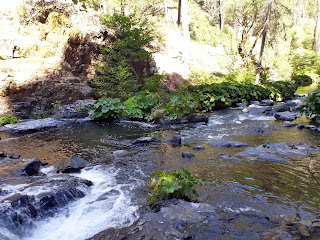 We hiked along the McCloud River Preserve, and came upon a caretaker's cabin, complete with deck and outdoor kitchen. Sometimes I do want to be twenty again. I could totally see myself living here, I thought. Swimming every day, hiking the trail. No obligations. 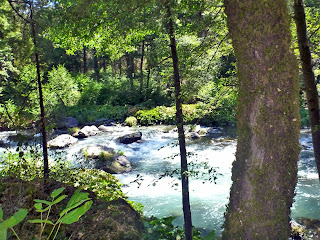 Whenever I travel somewhere, whether for work, I think about slipping into that place. Could I live there? What would my life be like?

I'm back to the desk next week though. I've strolled across enough grass to know it isn't always greener. I do like the work trips though. They are like little rewards for the rest of the time that I spend tap tapping on a computer. I look forward to the next one.
Posted by Mary at 11:53 AM