I don't write about running very much, which is funny because it used to be the main thing I did. I ran six days a week at times, scribbling frantically in a running log, keeping track. A short run was five miles, and a slow run was eight minute miles. I loved running, and it was my identity for a long time.

But as can happen when you identify with just one thing, I started feeling a little burnt out. There were other things I wanted to do, like hike, and swim, and kayak. I made friends who did those things, and I didn't want to desert them to run when I could be with them, learning new things. I had knee surgery after my second marathon and stopped running as much. I still run, but it's one of many things I do.

The other day I was in the mood to run, so I headed for the dirt road that climbs to the top of Mount Howard. The summit is over 8,000 feet and you start at about 5,000, and it's about four miles (I never measure my runs anymore). There are some level sections and then brutally straight up ones. I soon decided I didn't feel like trying to run to the top. I could power hike and be up there almost as quickly, so I did. 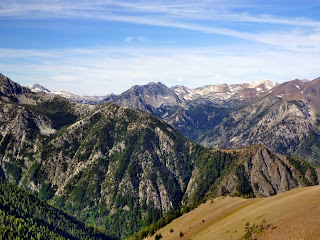 Usually I snowshoe this route in winter, and it was much faster to hike. I was at the top in no time. I took a quick victory lap around the main trail, wondering if the tram employees would wonder from where I had appeared (the tram hadn't started running yet for the day). Then I ran down.

It took kind of forever, because there are steep sections with little rolling rocks, and I wasn't all that serious about running anyway. It was just an excuse to get up there and back. I didn't write down my time or worry about how long it took. That's how running is for me these days. 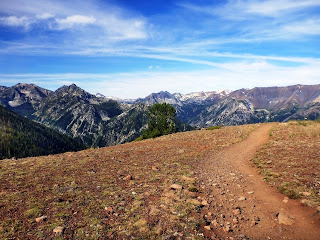 Nowadays, the intrepid friends I trained marathons with are just running for fun too. Maybe it's an age thing, or we've just proven to ourselves all we really need to. I started out at age 14, running through sprinklers in the neighborhood without a watch. Interestingly enough I have circled back to that kind of running. I like it.
Posted by Mary at 6:19 PM