Dragging Friends up Mountains (or not)

I still remember how certain adventures were posed to me, from the other person's filter: It's an easy skin to the yurt. It's not technical. The course has only one hill. The course is downhill. It's  not going to be that cold. You don't need trekking poles. We'll be back before lunch.
Ha. Ha.

Alas, often these descriptions turned out to be utterly wrong, at least from my perspective. I've been stranded on mountains freezing, out of snacks, or terrified. Because of this, I have learned to carefully describe the outing I am taking friends on prior to embarking. I often have people want to join me on my PCT section hikes, and I have to say something like: "This isn't like regular backpacking. There's not a lot of camp lounging. We're going to hike 20 plus miles a day for a week. And we don't really linger anywhere." So far, I haven't brought anyone to tears, but several people have backed out of these excursions.

Expectations, I have found, are really important. I have friends who want to hike about four miles and then lie around camp the rest of the day. I have others who aren't satisfied unless you are crawling back to the car.

This weekend I sat uneasily in the grass above Maxwell Lake, wondering if my friends were going to kill me. I thought I had described the hike fairly well. It's short but the last mile is relatively brutal. When you are lucky enough to live where I do, and I can go on hikes like this every week, it seems normal. Because look where you can end up: 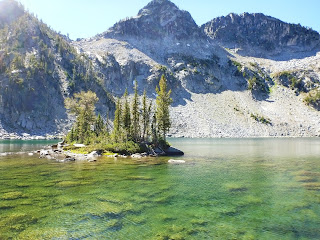 Happily, my friends steamed up the hill with no problems. Life was good. We hung out on a big rock, soaking up some September sun and eating dried mangos and the cupcakes I packed up for K's birthday. The next day, one of them was heard to say she would rather be doing homework (she's 15) than hiking the steep road we were walking the dogs on, but you can't win them all. 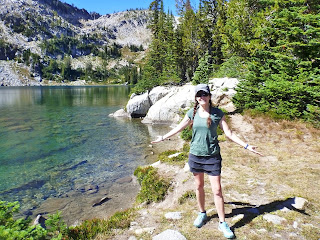 I've heard long distance hikes described in this way: The first third is physical. The second third is mental. The final third is spiritual. I think many adventures can be described this way. First you are puffing up a mountain, wondering why the heck you didn't stay on the couch with the dark chocolate peanut butter cups. The next part of it, you are tired, or hungry, or wondering where the &*^%! the darn lake is, and it's a mental struggle to find your determination. The last part, you learn why you are out there--solitude, silence, the company of friends.

How do you describe adventures to friends? Have you ever experienced meltdowns (yours or someone else's) due to bad descriptions of these adventures?
Posted by Mary at 5:41 PM