On loneliness and solo adventures

It was late and I was racing the sun. It sets so early now, and the cold comes with it. I don't really want to admit it, but summer is on the way out.

As I climbed the steep access road to Mount Howard, I was having second thoughts. I had only decided to backpack up there a few minutes before. I threw stuff in a pack and headed out, knowing I could be night hiking, and not really welcoming the prospect (the best way is to take the tramway up, but they stop running at four. Not an option).

I struggled with the effort not to turn around. For years I had nobody to miss, and this made adventuring a lot easier. I thought of all the reasons I could have stayed home. I could turn myself into a day hiker, I thought. You can often cover more ground, and you don't have to miss anyone, or deal with camping alone if nobody else can go. But I knew that isn't who I am. I know that once I start coming home every night, I lose part of the adventurous person I am. This is not to disrespect people who like to be home every night. It's just not me.

Decision made, I gained the ridge. The nature trails were quiet, void of all the day tourists. The nearest person was perhaps ten miles away if at all. I headed over towards the shoulder of Easy Peak, where I have only ever been on snowshoes. A full moon rose over the perfect campsite. There was no water here, but I had filled up at a convenient spring at the top of Mount Howard. I had been tempted to camp near the lift, but due to people feeding them, a legion of aggressive squirrels run in packs there. Better to avoid that area at night. 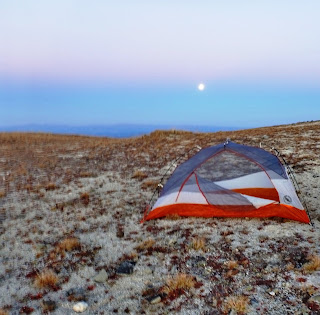 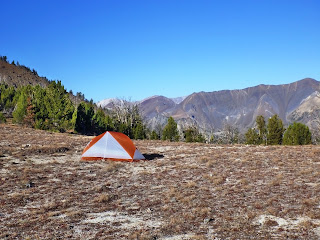 I sometimes get lonely on my solo adventures, but by now loneliness is an old companion, who slides in, puts an arm around my shoulders, and then moves on, replaced by the excitement of hiking new territory. Even though I love going back to familiar haunts, I am most excited by exploring. The next morning I waited for sun to hit the tent and got up at the decadent hour of six. I prowled around the shoulder of East Peak for awhile and listened to elk bugling in the valley below. 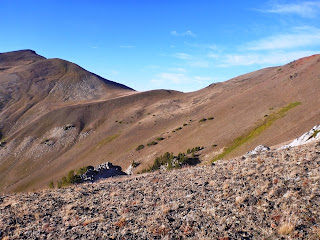 The people who own the tram want to develop a campground up here. While I understand how great this would be for a lift-serve camping crowd, I hope it never happens. I like it the way it is--wild, quiet, and yes, a touch lonely. 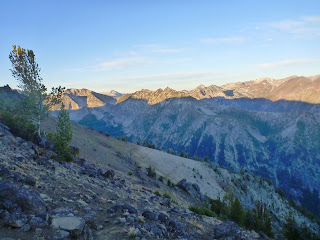