The time I walked 22 miles for a party

For decades a loose skein of people has been meeting at a campground over Labor Day. Children have been born, grown up, and moved away. People have passed away, and new partners have replaced old ones. I don't have a lot of traditions in my life, a result of having moved so often and having jobs that prevented me from commitments. It's kind of nice to be part of this one.

That being said, I am not a big fan of sitting in lawn chairs by campfires and making small talk. I'd rather be doing something. But I think being unable to relax is somewhat of an annoying trait. While I don't like to sit for prolonged periods (I do enough of that at work), I didn't want to show up at the party and fidget. I roll my eyes when people tell me they can't sit still. Of course they can. If I got in a good hike, I reckoned, I would be able to socialize for awhile. It's just like Ruby, the puppy--get her tired enough and she is a happy dog. 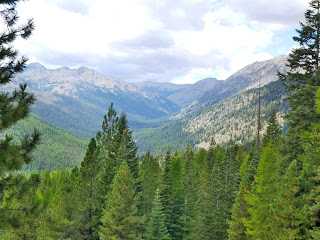 I parked my car at the Lick Creek Trailhead with foreboding. I've hiked this trail once, and as I began on the trail, I realized why I didn't hike it more often. It climbs steeply to the Imnaha Divide and  then dives down to the river, several thousand feet below. Though there are beautiful views, the rolling rocks under my feet demanded my attention. I also realized I had miscalculated the distance--it was 11 miles, not 9. Oh well. 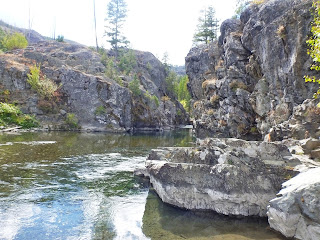 The river trail was in a state of disrepair. I forced my way through scratchy bushes and large rocks, until I was so hangry I had to stop at Blue Hole to finish my veggie quinoa breakfast burrito. In warmer times, people swim here, but the only company I had was a chipmunk. 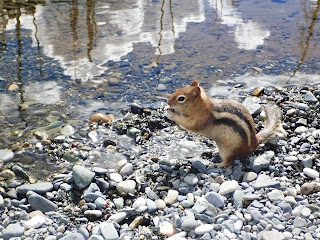 At the campground, the usual suspects were gathered around a fire. My PCT hike was so mild, with sweet, flat terrain, that this hike made me more tired than the eleven miles should have. I happily sat in a chair and munched on salmon.

Ruby had her first campout, and she quickly learned to enjoy the tent experience. She decided sleeping in between J and me was the way to go. There's nothing like a snuggly, back-sleeping puppy! 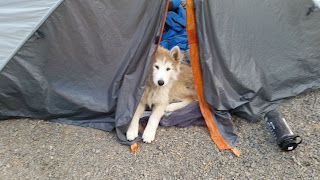 The next day, I lazily contemplated getting a ride back to my car, but the group was immersed in a round of disc golf, and I could see it was going to be awhile. I would hike it. There were no other takers. As I approached the Imnaha Divide, thunder rumbled from serious looking clouds. We have had no lightning storms this summer--a rarity--but it didn't take long for me to remember being afraid on a high ridge. I double-timed it, beating the storm. 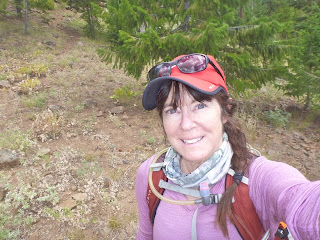 This corner of the Wallowas is largely the haunt of hunters, rarely visited by the Portland crowds. There aren't any lakes or epic views. It does feel a lot more like wilderness, though. I rounded out the hike by only seeing a few bow hunters and some people looking in vain for the elusive Imnaha Falls (I'm not sure these actually exist). Though I will always gravitate to the alpine, I appreciate forgotten corners like this.