what you bring to a potluck

I went to two potlucks last week. Sometimes I can look back on my life and think that they are measured in potlucks. As a seasonal park ranger, I lived sequestered in mountain compounds, with no TV/movie capability and years before the Internet came along. Potlucks were the main source of entertainment. We would all gather at weathered picnic tables, bearing our creations.

Potlucks were held for memorials, weddings, when people left the area, or just because. Later, when I moved to small communities in the middle of nowhere, potlucks continued. Once a friend arrived at a potluck and set her dish down only to note that she had arrived at the wrong potluck--hers was a little ways away down the lakeshore!

In a highly unscientific study, I maintain that you can tell a lot about a person by what they bring to a potluck. There's the person who does not plan ahead--the guy who shows up with a bag of chips. There's the foodie (I'm thinking of my friend The Freak of Nature) who always has something complex and delightful, needing ingredients not easily found. Two guys I know always bring the same dish--for decades--is there any correlation to the fact that they both like routine and are change resistant? And for the love of god, don't marry the guy who never brings anything to a potluck (Been there. Done that. Divorced it).

Over the years in this small town, some of the same people attend the same potlucks. You get to know what to expect from some. J always brings his "scalloped corn" dish, and people know he will bring it. They ask for it. Everyone knows that I will toggle between a dessert, usually cookies, and some kind of savory appetizer.

The conversation at potlucks is as varied as the food but over the years, it's tended to be focused on the outdoors. What hikes have you done lately? Where are you planning to go? 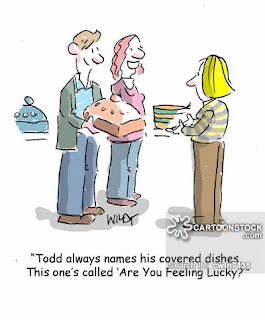 Potlucks have gotten more complicated with the advent of gluten free people (the ones who really suffer from gluten probably suffered in silence in the past). I'm reluctant to show up with bread or oatmeal cookies anymore. My new standby is a gluten free, vegan spicy ginger cookie.

I wouldn't call myself a picky eater, but potlucks for me can be a maze of future regrets. I generally stick to the salads. In Alaska, someone could be counted on to bring some form of salmon-smoked, baked, broiled, casseroled, always a good choice. The brownies that look so good might be, disappointingly, from a box. Dishes in a crockpot could contain dreaded jalapenos. You need to be cautious at potlucks.

Sometimes, though, like this week, you hit it just right. Steelhead, homemade bread, sweet potatoes, tabouli, salad, huckleberry cobbler. Two great potlucks in one week! It's an embarrassment of riches.

Do you go to potlucks? What is your signature dish?
Posted by Mary at 7:38 AM