After ten days away from home, my theory is this: you can get so immersed in a place that you can think it is the only place you can ever live. I never used to feel that way. I wanted to roam. I didn't understand settling in. But the road wasn't always easy, and after over ten years of it, I wanted out.

We wandered up the big canyons: Hovenweep, Sand Canyon, the ruins of Cajon. People lived here once, then had to move. It happens to everyone. Or it doesn't. Life is uncertain.

As much as I disparage road trips, they do open my eyes. I travel for work frequently, but those are quick, conference room trips, with occasional weekends to dip into the wilderness. My vacations in the past four years have all been spent hiking on long trails. It's been a long time since I drove through a town and thought: You know what? I could live here.


Lingering over this road trip is a heartbreaking fact: there is a very good chance we are going to be forced to move from our little mountain town. I hope against hope that this isn't true. If we do, where will we go? The choice is not up to us. I try not to think about it.
We walked the ancient trails of people who were forced to move when the climate became inhospitable. There's still water in the spring at Cajon but that must not have been enough. At Hovenweep the old check dams are dry. It's a warm day until it begins to snow. It's time to go home, our home for now.
Posted by Mary at 7:04 PM 17 comments:

I have forgotten how to trust slickrock. I inched my way down the "practice loop" of the Slickrock Bike Trail, on foot. There was no way I would ever ride this, I thought. I needed a practice loop just for the practice loop! I learned to ride a bike too late. Fear is too hard to overcome.

So I decided to hike it instead. I am on a road trip, and it's hard to follow any kind of healthy eating plan or enough exercise when you have to cover this many miles. Still, I try. This loop is only about two miles, not really enough outdoors time for me. This week I was at a book signing, and a fellow author appeared. She is 83 and glowing with life. She does farm chores every day. "It's the outdoor air," she said. "Indoor air isn't good for you."

There's also genetics and good luck, but I think she may have something there.

All too soon, we had to pack up and head back out. Too many hours in the car, too many "Crack Chips" (Juanita's chips, you can't stop eating them), not enough exercise. Road trips just aren't fun for me. Plus I drove across country solo more times than I can count as a seasonal ranger.

Still, when you live in the west you have to bite the bullet and drive (it's two hours to the nearest airport and an hour and forty minutes to the dentist from where I live). Recently an Alaskan friend came to a place near me. "It's only four hours away!" I exclaimed. "You're really close!" However, he decided it was just too far. "An hour's drive is too far," he said.

It's funny what you get used to. But I am looking forward to some outside air.

Where are you, Kris Fowler?

I can't say what it is about this story that has obsessed me. Maybe because I am a PCT hiker too. I remember White Pass in August, a nightmare of the worst mosquitoes I have ever experienced. We pushed our hiking speed past three miles an hour on the flat, boggy sections, and two southbound hikers were right: after Snow Lake the bugs inexplicably let up. There was also a maze of connecting trails where we had to remain vigilant to stay on the main path. Easy, in August.

Climbing up from Chinook Pass, the worst camping night of my life at Sheep Lake, hurricane force winds bending the trees. An exposed ridge with brutal wind as we came around to see Mount Rainier staring us in the face. But as the PCT goes, a relatively benign section. Except in air thick with rain. There are so many things that could go wrong.

There are more questions than answers. Why didn't a southbound hiker, camped less than 20 miles away from White Pass, run into Kris the second day? If the sightings are real, why did it take 10 days to hike 63 miles? Where are you, Kris Fowler?

The snow is piling up in the Cascades.  I think of all the chances I have taken.

I remember what it was like when I first started hiking solo. There were no cell phones. No beacons. The GPS technology, when released to the public in the 1990s, was inaccurate. What I learned was that if I got myself in a fix, I had to get myself out. I still have that mentality. It's why when my friend shows up with a fanny pack for a hike I am lugging a backpack with essentials.

The good thing about long trails like the PCT is that you can temporarily disappear. The bad thing is that you can permanently disappear. Circumstances prevented me from joining in on the search, but I wish I could have. The pictures some of the last finishers shared were breathtaking. They crossed slopes that clearly were ready to avalanche. There is such a thing as wanting something so much that you disregard the weather.

I try to fill this space with reports about fun adventures, but I just don't have the heart for it today.

Years ago, in the Florida swamp..

I bounced about like Tigger in the FEMA trailer that three of us firefighters shared. A single wide of dubious stability, it also bounced with every step. It was raining outside and I needed something to do. Mike looked up in annoyance. "You need a hobby!" he proclaimed.

But..I had plenty of hobbies...didn't I? I ran...I hiked...I kayaked... In thinking about it, I realized that most of my hobbies had to do with the outdoors. And that is still the case.

I've been confined lately, due to this never-ending cough and because the puppy got fixed and isn't supposed to run (even though she really wants to). She can't really be trusted on her own inside for a long period of time, so even though we are having the warmest November I have ever seen, I am stuck..inside.


There are those who have a whole suite of indoor hobbies but I am not one of them. I can't crochet, sew or knit, and don't really have much interest in learning (I have enough stuff, and most of the people I would give gifts too have as well). Food is fuel and I am not that into cooking elaborate meals. I do bake bread sometimes, but that isn't really a hobby. I read, and I write, though that is more my business than a hobby, at least in the eyes of the IRS.

The main problem with indoor hobbies is that they mostly involve sitting. That is fine for people who have active jobs or who don't work full time, but in my job I tend to sit. That is the last thing I want to do when I'm not working.

I've run into people who have myriad indoor hobbies. One of my friends is building an airplane. (Yes, one that flies)  Others do pottery. Glassblowing. And so on. Some of these things sound interesting, but involve space, which is a premium in my cabin.

It's taken enforced confinement for me to realize I still don't have many indoor hobbies. I think that's OK though.  In some sense, hobbies keep me from writing, and my agent has been patiently waiting. The next novel won't write itself while I am doing other things. (HELP! I need a plot idea. What is a secret that a friend  (early twenties) might keep from two others about her past that they find out years after her untimely death?. If I pick it, I will send you a free book when it gets published. Don't hold your breath, publishing is slow. Think 2018 at best). Winter's coming, people! You can't snowshoe all day!

Wait! Yoga! Does yoga count? When is the last time I did yoga? Um...

Do you have indoor hobbies? What are they?

I haven't been sick for four years and this year alone I caught two colds. It's hard not to be annoyed at this. However, my choice was either to cough uncontrollably at home on a sunny day or go for a hike. Spoiler alert! Hike it was. I always feel better when I'm moving.

T-N-T and I pulled up to the Saddle Creek trailhead to find an uncommon sight. It was completely packed with hunting camps. It was the second day of elk season, and apparently everyone had decided to come here. Most of the hunters were hanging around camp, not doing a lot of hunting. So we set out. Since all three of us were afflicted with varying degrees of the same malady, we took it slowly. 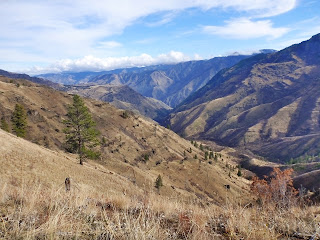 Strangely enough as we sat there a mysterious convergence of diverse users showed up to this one place in time.
Some downhill mountain bikers... 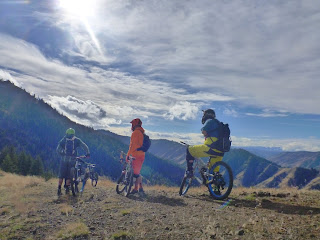 some hunters on foot.... 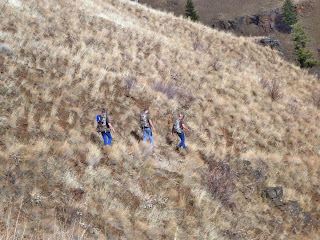 And some horse packers (no photos of them).

It was a coincidental merging of very different people in one small place. And even though we were all doing our own thing, we could agree on something: the place where we stood was important to us. Keep public lands public! 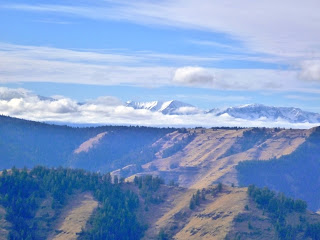 As we descended the trail, T said, "Now all we need to see is Jordan," referring to someone who always seems to appear in the wilderness. We arrived at the trailhead and...there was Jordan. Coincidence? I think not.

Sucking on cough drops, we made our way home. Sleep without Nyquil was doubtful. But it had been a good day. It was good to see everyone out there enjoying a beautiful place. There was plenty of room for everyone to get along.