I snarled along on snowshoes. In case you haven't tried it, sidehilling on snowshoes with a backpack full of overnight gear on unconsolidated snow is hard. "Why do I always do hard things on my birthday?" I whined. Granted, it wasn't my actual birthday, but that day is on a weekday. so there it was, my birthday trip, my idea. I had only myself to blame.

Honestly, I would rather have a birthday in July, because swimming in an alpine lake would be pretty much ideal. But since my parents didn't take this into consideration, I am stuck with January. Which, once I cheered up, can be pretty good. When we arrived at the backcountry shelter, I decided some more climbing would be all right.
The truth is, the things I consider hard would be an easy day for some of you. For other people I know, it would be impossible. I have seen some friends who have no health limitations just stop doing anything hard. That's their right. But I think when you give up, that's when things really get difficult. So I'll keep it up, snarls and all.

We spent a starry, near-full moon night in the cabin and climbed some more the next day before heading out. J likes to remind me that snowshoes don't have much reward. You climb to a high point and then you have to just hike down, unlike skiing. But I don't mind. There's something contemplative about snowshoeing in deep powdery snow. 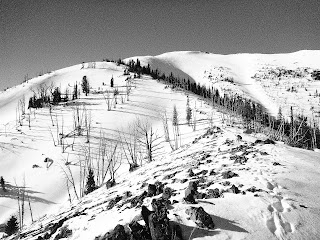 It's so simple up there. Melt water for snow, chop wood for the stove, go to sleep when it's dark. The cabin is tiny but whenever I'm up there I think of how I could really live there. I imagine where my gear would go, and how I would stomp out a snowshoe track to run on, and how much easier things would be. 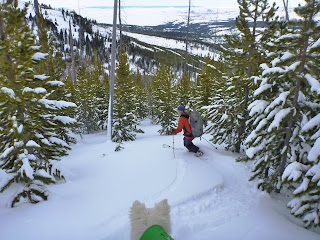 But maybe not. Who knows? It was time to descend. Another successful birthday weekend, doing hard things. May it always be so.