Yesterday Ruby jumped the fence. She was off for a wild runabout, reappearing later without remorse. She was so excited when she returned that she could  barely breathe. She raced about in a state of delight (At least she came back). I'm sure she wanted to tell me all about her adventure, but also how much she missed me and wanted to come back. Oh, Ruby. That is a dilemma us fence jumpers have to live with all of our lives.

Obviously she can't be doing that. There's so much snow that it's easy for her to get out. We'll have to shovel.  But this started me thinking about fence jumping in general. Breaking out. Doing the unexpected, even if you "should" be doing something else. We did this on Friday. I worked longer days so Friday afternoon was free. Sort of.

I had deadlines. I should have been at work. But winter decided to reappear. The snow was the best I have ever seen it. It looked like December. Because of all the fluffiness, I was able to ski down slopes that I usually have to timidly walk down. It was not to be missed. Well worth jumping a fence or two. 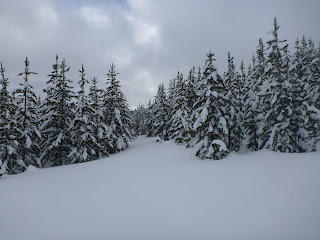 I skied the next two days in a row. Snow like this comes only a few days in a lifetime. I dragged some friends on a windswept traverse one day, and the other day we sped silently through the woods, successfully navigating the Hill of Death with no falls. This winter is the one that never seems to end.

What makes some dogs fence jumpers? I don't know. The lure of the unknown must finally overcome safety and home. I get it, Ruby. I was a fence jumper when I was younger too.

Now I just ski. But there's freedom in that. With snow like this, I can go wherever I want. Sick of winter perhaps, the others have abandoned the trails. I haven't skied a groomed trail in years. Instead I hunt for passage through trees. Sometimes it's there, sometimes it's not. 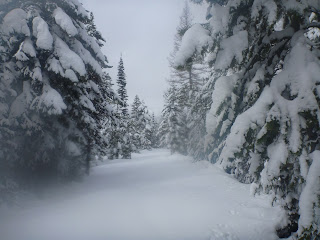 Apparently, it's been a hard winter. At least that's what people are saying. It doesn't seem that way to me. We had a brief February thaw and people appeared in shorts. They took studded tires off. They were fooled. You don't turn your back on winter here. We have two months at least to go.

The thing about fence jumping is that sometimes you can't find your way back. That's why Ruby has to learn to stay home. That's why I don't pack up and go hike the Pacific Crest Trail in its entirety, in one season. Or go sequester myself in a waterless cabin and write novels for a year. Other people don't subscribe to this. "YOLO!" they exclaim. They all have tales of people who died too soon, reminders that life is short.

It is short. As we skied today, the blue diamonds we followed were put up by a man who left us way too soon. If he had known, would he have jumped the fence? Was there something he passed up, thinking he would have time later? It's impossible to say. The only thing I can think of is this: jump a few fences, don't miss the adventures that would break your heart not to miss. But come home to the people who stay behind, waiting for you. 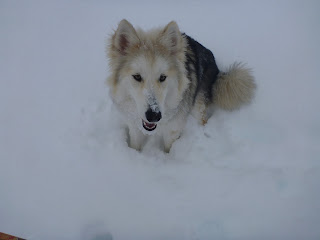