Though it is far too early for spring, our frozen lake has broken up. I am unreasonably sad about this. A strange rain event has brought awful frozen slush and the inability to get out of my driveway. The city plowed for awhile and gave up (I'm sure they didn't give up. But it kind of seems like it).


By mistake, I invented a new sport. Rainshoeing! Rainshoeing happens when it's raining, but you can't stand to stay inside. You put on rain gear and bring your snowshoes, wandering around the county until you find a trail that isn't too icy. You slog through slush, crust, and finally get high enough that you reach the place where it is snowing. Sound fun? It actually is. In a weird way.

Nobody else was crazy enough to try it so I was free to imagine that I was setting all sorts of rainshoeing personal records. Fastest known time! Youngest woman! Oldest woman! The possibilities were endless. 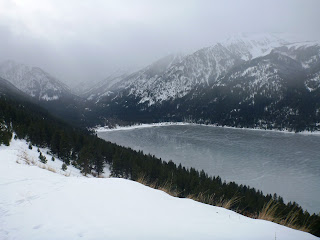 I doubt rainshoeing is going to catch on, though. When I went to the little gym today, there were an unprecedented four other people in there, more than I have seen in months. Everyone looked a little despondent. Luckily, it began to snow, and possibly rainshoeing is a thing of the past.

It's probably like Snowshoe Ballet, which I once attempted, my companions watching dubiously, not inclined to participate (try it sometime, it's quite strenuous).  I'm probably the only person participating. But that's OK. That way I have all the records.

Ever invented a sport?