Rain in March. It really shouldn't be raining in March, but nothing about this winter has been normal. What this means is that cross country skiing is history but hiking is not optimal. Optimistically we ventured to a usual spring sure thing, Davis Creek north of town, and found ourselves floundering in deep snow. Nope, not going to happen.

You take what you can get, so we headed to Fergi, the local volunteer-run ski hill. Fergi possesses its own unique charm, with a T-bar and $7 lift tickets. Even with the weather so awful, when the lift isn't running, people determinedly skin up to get a workout.

Except for me. I snowshoe. Yes, I am the fool who snowshoes up the ski hill, just to snowshoe back down. Where the fun is in that, I'm not sure, but it is something to do outside when the options are very limited. I did try to ski down once with my cross country skis, but this was punctuated with screams of alarm and not likely to be repeated.

It's not a very long hike up. In a short amount of time I was at the Voodoo, the small hut at the top of one of the runs. The story is that the original building at this location was named after a Rolling Stones album, the Voodoo Lounge. At any rate, it's a cute little building, and I spent the night after I got married in it. 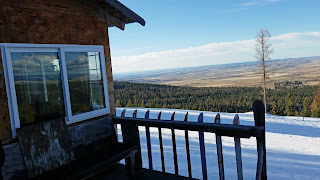 Once you reach the Voodoo, it's all down hill, which in snowshoes really isn't easy. I picked my way down praying a fall wasn't in my future. It takes me longer to go down than it does to go up. But eventually I arrived back at the base of the hill. 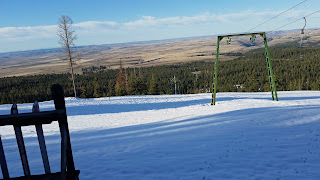 Fergi is usually the site of much revelry, but today nobody was around. Fat bikes have been ridden down it, and on one occasion a guy tried to take the T-bar with a kayak, in order to kayak the snow back down. Neither attempt, up or down, was very successful. I'm pretty sure I am the first and only snowshoer to hike the hill, though. It's good to be a record holder.