I finally got out of town. It's been five months. I had a book reading on the west side, so I went a couple of days early and drove to the ocean. There's just something about listening to the waves that I had been missing. The coast has a peacefulness I needed. Sometimes I think I could just go and live in a remote cabin and never talk to people again. When I start feeling that way I know I need to go someplace wild. Or at least, semi-wild. 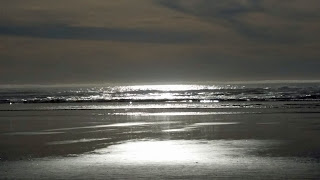 When I first pulled into Newport, it was an uncharacteristically sunny day. People were everywhere! Oh no, I thought. But despite all the people, I had to get out there. 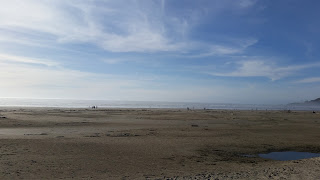 There were endless views in each direction. Time to go for a run! 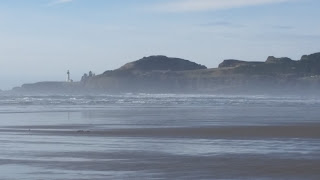 Beach running is so easy. So flat! So sea level! No rocks, no bears, no mountain lions! You can look around without the possibility of a face plant. I ran toward the lighthouse, and then turned around to run in the other direction.

The next day the weather returned to its normal self. Agate Beach was completely deserted, with torrents of rain and a biting wind. Driftwood had been tossed onto the sand. I still made myself go out, stalking the abandoned coast. Nobody else was out there, unlike the day before. This was more like it!  I am a fan of extreme weather--the years I lived in Florida with its endless sameness were hard to take.

I have to say that this has been a difficult time lately. People are so mean to each other now. There's a lot of superiority about lifestyles and how much better they are. Not knowing if we have to move (we still don't) has been hard. What helps is to get out, to realize that nature endures. This beach will be here long after I'm gone.

It rained so much that day that big rivers ran across the beach. The waves were huge. It was wild enough. I had my fix of the coast and could head back to my landlocked little mountain town. It'll be backpacking season soon. I can hang on until then.

Running on the beach, yes or no?
Are you a beach person?