I've had it! It is time to be selfish. I've spent weeks now as the supportive partner and making sure everyone, pets and people, are all right with the move, and also hours in a house feeling a bit isolated from society (working from home is both a blessing and a curse). It is time for a break, and that almost always means the mountains.

It's time for a few days where all that matters are how far it is to the next water source or campsite, Where my job all day isn't to field conference calls and lead groups and tap away at management plans, but to hike. Just to hike, all day long.

I am going with my intrepid friend Jan to hike from Chester to Burney in Northern California. This will be somewhat of a leisure tour, as we have five days and only 88 miles to cover. The whole section is about 129 miles but Jan has to be somewhere and and what's wrong with 17 miles a day?

Unfortunately, we must lug bear canisters because they are required in Lassen National Park now. Hikers love to hate on these cans, and I am not an exception. While they make storing food at night much safer and worry-free, they make a gut bomb in your pack that is hard to pack around. Why can't you approve Ursacks, National Park Service?

We will also hike across the infamous Hat Creek Rim, well known for high temperatures and waterless miles (though there is a water tank now, partway across).

Typically at this time of year the trail is not crowded. But with the high snows and hazardous river crossings, thru-hikers in droves are skipping the Sierra and starting again in Chester. We may be with the herd. Moo. 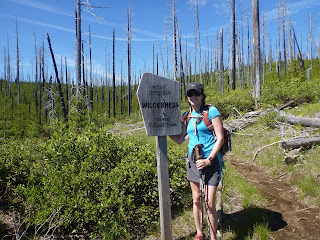 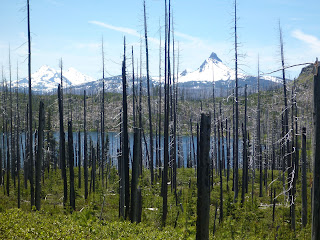 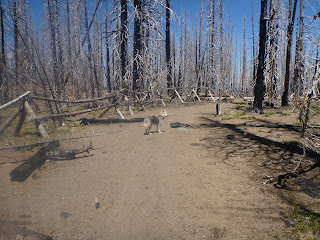 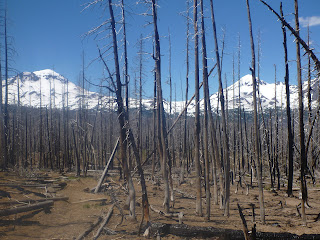 Stranger in a strange land

It turns out that I'm not good at moving anymore. I used to be. Back in the day, when I moved every six months for a period of ten years, I was the Queen of the Road. I missed every place I left, but I drove eagerly toward the new one, leaving everything behind with few regrets.

I am out of practice. The last time I moved was in 2009, and I was ready to leave Alaska, a place where I had seen heartbreak and too much rain. 2009--a lifetime ago. Now in a new town, I wake up with missing a place so much that it hurts. I didn't realize how much I depended on looking out to see Chief Joseph Mountain every morning, my barometer for the day. I didn't realize how much I depended on knowing that friends were right down the street. Moving, even if it's only for a few months, is hard.

What to do when I feel sad? Find a trail of course! There is an excellent trail system for running and mountain biking right in town, but those trails, at least the parts I walked, are pretty flat. This is a big change from where I lived, where every run started with a soul-destroying hill climb. Running those trails will be great. But when a girl wants elevation, she needs to look elsewhere. So we found a six mile route along Wychus Creek. It was listed as "difficult", which made me laugh, because there were only a few rocky climbs. But it was still a nice hike. It paralleled the Wild and Scenic River, with some swimming  holes, were it a bit warmer. 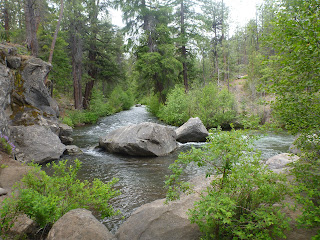 Then we decided to find the snowline. Turns out it was only a few miles from town. 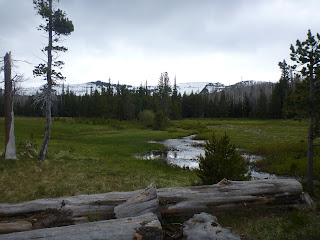 Being in the alpine made me happy. It was cold up here, and snowing.

The pets are all adjusting, though Puffin the cat doesn't like it much. He misses being outdoors, and keeps trying to find his way home. Turns out what they tell you about cats trying to go back to to the old house is true. As much as he loves us, he loves the place more. I get it, Puff, I do.

I toed the line (a piece of flagging) feeling the way I used to in my racing days: a combination of tummy upset and wanting to throw up. The other recruits, all laden with the same forty-five pound vest that I was unhappily wearing, looked, and probably were, about twenty years old. I noticed that just putting the cumbersome vest on caused me to gasp for breath and I regretted the 14 mile day hike I had done a couple of days before. I had climbed a few thousand feet to snowline on one trail, hiked down, and climbed another trail to snowline. Maybe I should have tapered?

Here I was, doing the work capacity test for firefighting once again. I first got a "red card" in 1986, when it was still the mile and a half run. You had to complete it in eleven minutes, forty-five seconds, which at the time seemed laughably slow, but now would represent more of a challenge. After the run came the step test, where you inexplicably stepped up and down on a box, accompanied by a metronome, for five minutes (I think) and then  your pulse was taken to see how quickly it returned to a level that was measured on a scale. If your heart had too many beats, you failed.

Now we walk for three miles with forty-five pounds and have forty-five minutes to complete it. Which sounds easy, but for littler, shorter people it's not easy. I realized as we started out on our first half mile lap that while I have been hiking fast a lot, I haven't been hiking fast with a lot of weight. If I carry a forty-five pound pack these days, it can only be in winter when I need extra snow gear. Usually my pack for a week tops about 25 pounds.

I wondered why I was taking the test anyway. When most people think of firefighters, they think of people swinging tools on the fireline. I am still qualified to do that, but haven't in awhile. I usually work at the helibase, directing the helicopters. It's not all that glamorous, but it's still a part of a world I really used to love. It's not my world anymore, but I like to visit it now and then.


The weight sat heavily on my shoulders. The vests are an improvement over the days we loaded up ancient backpacks with sand, but your shoulders still take the brunt (there are allegedly "women specific vests, and vests in the shape of a V that are supposed to be more forgiving, but we don't have those). A couple more guys passed me.

I was still doing OK, though, with miles in the high thirteens. Then it happened. Three girls who had been back a ways started a slow run shuffle (you aren't supposed to run, but some people get away with a flat-footed jog) and passed me right in the last eighth of a mile. I snarled to myself. I hated this in races and I guess I still hate it now, people who let you set the pace the whole way and then sprint past you at the very end.

I refused to run after them, and ended up finishing in 41 minutes. I stomped back to my car, remembering the days of 36, 38, 39. It really doesn't matter--you pass whether you finish in 31 minutes (which a guy questionably did one year that the course went behind some buildings, we suspected him of running) or 45 minutes. It's stupid to care, but I do. The WCT brought back my racing days, when I was young and fast and could win races, or at least place. That also is a world I don't live in anymore, and don't really want to visit.

So I have a red card, again, year 31. I don't know if I will go on any fires or in what capacity. It's hard to fit them in, two weeks in a summer that's short enough already. This is probably my last WCT, and I am coming around to being OK with it. There are plenty of other worlds to visit.
Posted by Mary at 5:18 PM 11 comments: