Adventuring in the smoke

I get that there's a fire twenty miles from you and that it is raining ash in your neighborhood. I understand that it is burning in a place that you consider your playground and you are devastated. But in case you haven't noticed, this is what has been going on in rural towns every summer. No, it's not scary and apocalyptic until your house has been under evacuation order or you can see actual flames.

Sorry, everyone else. I find it interesting that until smoke and fire affects a metro area, it largely goes unnoticed by the majority of the population. And frankly, somewhat annoying. But that's enough of that! Living in the forest, you know that you are going to be faced with fire someday.

I am lucky; I don't have asthma or any other known health problems. I definitely sucked in enough smoke when I worked directly on the line as a firefighter, so who knows what is lurking there, hopefully nothing. Most people in town have decamped to the gym, but summer is short. If I can stand it, I am going to get out there.

So I did. With trepidation I drove the awful, washboarded road to the Canyon Creek Meadows trail. I had wanted to hike this short trail for a long time, but had been scared away by reports of hundreds of people on it. And since it was one of the few trails still open, I thought it would be packed. To my surprise there was only one vehicle in the parking lot. I happily hiked through a thin layer of smoke towards Three Fingered Jack. I guess it takes smoke to find solitude on this trail. That, and an excessive heat warning. It was supposed to be about 100 degrees. But if it was that or the gym, I'd take the trail. 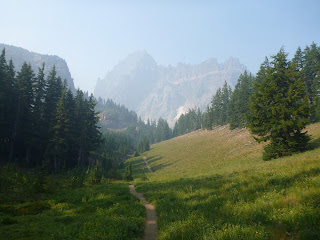 If you stay on the main loop, this trail is only five miles, hardly worth the drive, but wait! You can go further. An unmaintained trail winds its way through some delightful meadows and eventually scrambles up on the shoulder of the mountain. We all have our difficulties and one of mine is descending slippery talus. I avoid this if at all possible. But the promise of a little lake drew me onward. It was worth it.

Not wanting to go home so soon, I extended my hike by taking a left to Wasco Lake, which is mostly surrounded by a forest burnt in 2003, and climbing up to the fire closure at Minto Pass.

Since the first day was so successful, I decided to take on Tam MacArthur Rim on Day 2. It seemed a bit more smoky as I drove toward the trailhead. But here I was, committed, so I began the climb. One thing I have noticed about the smoke is that I feel more tired. I can't spring up the hills like I usually can. Otherwise, it didn't seem to hamper the hike all that much.

The views were pretty muted and after I had walked the ridge for an hour and a half I thought that it was probably best to retreat. I met a friend on the way up. "I need to get in a hill," she said, looking doubtfully at the smoke cloud. It had gotten a lot worse in the last three hours. I wished her well and beat feet.

Since then we have had one reprieve, when we saw actual sky for the first time in weeks. Today, though, it is the worst it has been in a long time. Today is not a day for heroics. Today is a day for the gym. Even adventurous souls need to know when to call it.