Sorting through (a hiking story, sort of)

I've been slowly moving back into my cabin. As I haul rubbermaid containers inside and open them, I am amazed: all of this stuff. And I thought I got rid of a lot of stuff when I moved out! Living in a thousand square foot house with no real closets, I probably have a lot less than most people. Still, it's way too much.

Why is it so hard to get rid of stuff? I had hardly anything most of my life: if it couldn't fit in a Chevette, it wasn't going. Then when I left Alaska I banished almost everything: all of my furniture, most of my possessions. I liked traveling light. But in the last eight years, things have slowly crept in. I am ruthless this time: out it goes!

I laugh when I see some of the items. The array of hair potions, trying to tame what hypothyroidism has done to a formerly glossy mane (it's not pretty). I have ziplock bags of unidentifiable pills (Tylenol PM? Aspirin?). I obviously store my fears, because my medicine cabinet is heavily weighted toward blister prevention. As far as clothes, I have hung on to "office wear", just in case I ever return to one (it's doubtful, but you never know where life will take you). I can't seem to part with my XtraTuf Alaska rubber boots or my storm kayaking jacket. Maybe doing so would admit that part of my life is really over. It is over, but maybe, I think, there's a piece of that woman who did those things that I don't want to let go.

I finally couldn't take it anymore. It was time to hike. I held no illusions that I would get to Ice Lake; tales of waist deep snow elsewhere abounded. If I could just go ten miles, I thought. Maybe that would smooth out some rough edges (life has been pretty complex lately).

I hurried through all the old landmarks: the wilderness boundary sign, the place where the trail rides turn around, the first campsite for those who overestimate their fitness. I crossed the bridge and headed up toward the basin. A storm was coming in, with lots of snow and 40 mile an hour winds. I knew I had to beat it.

Strangely enough, there was only a skiff of snow. I was going to make it all the way! Giggling with happiness (yes, I am a dork), I arrived at the lakeshore to find gale force winds and a lake churning with whitecaps.

It's interesting how the moods of a place can change so fast. In summer this lake feels almost tame and hospitable. You can go swimming. (of course, "summer" at almost 9,000 feet is really only two months max). Now, it felt like a place where humans should not stay. Looking over the peaks, I saw a ragged hem of clouds approaching--the storm. High on Sacajawea, mountain goats roamed, seemingly indifferent to the gale force winds. 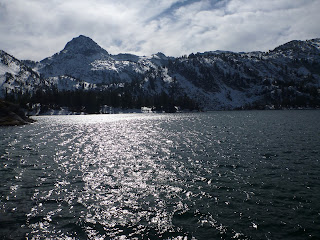 Stuffing a bagel into my mouth, I raced down to safer ground. The entire 16 mile hike would be done without breaks. As a result I hobbled back into the house, flopping dramatically on the couch. Nobody was too impressed. The chores still awaited, an army of containers with too much stuff. Tomorrow, J informed me, we would have to go cut wood. In the snow. Because, we could buy wood, but that would make us soft, I decided.

I stared at the detritus of my life. There was my wedding ring from my former marriage. Though the marriage was awful, the ring was pretty. I started to toss it, then reconsidered. I can hang on to it a little longer. Maybe I'll have it made into a necklace. Not as a reminder of someone who treated me poorly, but because I survived it and came out stronger. Or really, does everything have to have meaning? Maybe it's just a nice ring. 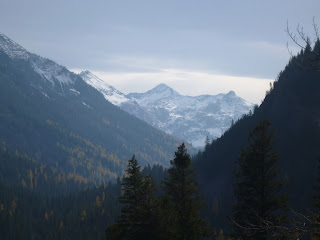 Some things you just have to hang onto until you are ready to let them go.