take my breath away

I'm the one around town wearing sandals because I sent most of my winter things home. In my defense, it was one hundred degrees at the time. A sudden winter has caught me off guard. All summer, I never even toted a jacket because honestly? It never cooled off.

A healthy snowfall in the high country has put out the fires but not the closures, so I skirt around them, seeing what I can. Golden Lake had been on my list for a long time. The guidebook ominously warned that it was difficult, citing the .7 miles of cross country travel that were involved. Not one to be intimidated, I gathered all the weird remnants of warm clothes I had left, grabbed the puppy and headed out (Cale is unhappily recovering, banned from hikes for now).

As per usual, the first five miles were through a burnt forest. If you didn't know what was ahead, you might give up, but suddenly you break out into a huge meadow with views of the mountains. Most people stop here, and on the way out, I saw three sets of puffy jacketed backpackers, bound for this location. I have to admit I was envious. This was their view for the evening. 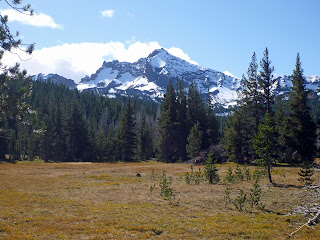 The snow line began as I climbed up from the meadow, and I regarded my running shoes with dismay. I had sent my hiking boots home, and these shoes were reaching the end of their useful life. Dark clouds swirled over the peaks, a reminder of an uncertain weather forecast. A prudent hiker might consider ten miles enough and turn around, but I knew this was my last chance to see the lake before I left town for good. Soon the snow patches became solid snow. With this, I was sure that the user path to the lake would be covered and unrecognizable. This might, I told the puppy, be the end of the road.

Following the landmarks on the map, I came to a single set of tracks in the snow, heading east. Hmm, I thought. This looked like the place where you could leave the trail and reach the lake. Should we try it? Yes, we should. Keeping a close eye on the way back in case the tracks melted out, we advanced cautiously around a meadow and through trees until we reached the lake.

We were completely alone in a beautiful place. Sometimes, nature takes my breath away, and this was one of those times. 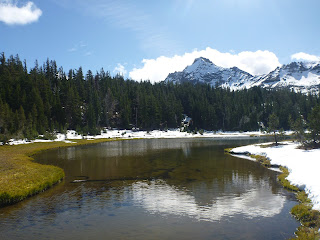 This was a place that was hard to leave, but as I watched, the clouds began to thicken. We retraced our steps to the relative safety of the trail. 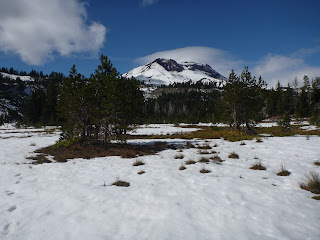 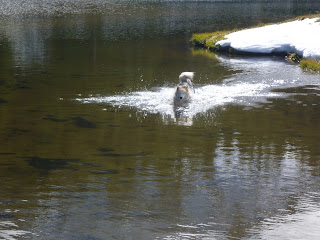 My feet were wet and I was hungry, having only nibbled on a few pretzels. We had six and three quarter miles left to travel, mostly through uninspiring burnt forest. The cold was creeping in. It was time to move. We probably only spent five minutes at Golden Lake, not nearly enough. But in a world that seems too sad to live in sometimes, those breathless moments are what keep me going.
Posted by Mary at 6:40 PM