Last year at this time, we were skiing across this lake.

Sadly, we are in a somewhat different situation this year. I count on winter as a time to do less running and hiking and, instead, more skiing and snowshoeing. They are different activities that work different muscles, something you have to think about as you pile on decades of athletic endeavors.

Unfortunately, there's no such break this year. The trails aren't snowy, but they are rivers of ice. Not just "I can wear microspikes and be OK" ice, but thick, slippery, "I might fall and break something" ice. Desperate to avoid the treadmill, I have been trying to run creatively. Endless loops around the campground, with the state park workers looking on in bemusement, crunching through snow on the moraine....none of it is fast. I'm glad I don't care about my time anymore. I'm just glad I can still run.

Another day I decided to "chase the fat bike." It's a good incentive to keep going up the hills, because sometimes I can keep up and even pass the bike. Sometimes I can't.  The bike can smoke me on the downhills, but sometimes on the flats I stand a chance. It all comes down to footing. On this occasion, the snowmobile club had groomed the canal road, and the conditions were outstanding. 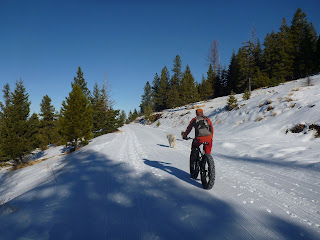 There was just the crunch of my shoes on the corduroy as I climbed the hills. There were also occasional stops as I ran into a friend skate skiing and several friends snowshoeing. Those caused delays in my quest, but I usually managed to catch up. It was one of those times when I remembered why I like to run--the stars aligned for a pain free, lighter than air run.

Eventually I turned around and went down to the ski area to do a shuttle for the fat bike. With the sun beating on the deck, it felt like summer. Which is both scary and wrong, but in the moment, I appreciated it greatly. 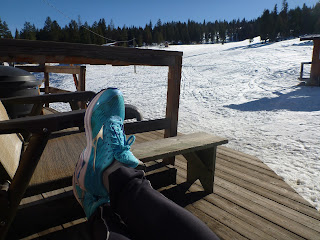 I believe this one of the first descents of the ski area on fat bike. 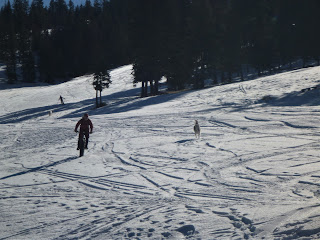 People keep saying the snow will come, but they also say that there is greenup in the canyon. It is way too warm for January. This could mean a smoky summer for us. In seasons past, February and March have been the snowiest months of all. We will wait for snow. In the meantime, I'll incorporate chasing a fat bike as part of my training regimen.