Close Encounters of the Beary Kind

I have a confession.

I am unreasonably, irrationally afraid of BEARS. I managed to get this fear under control when I worked as a wilderness kayak ranger in Alaska. After all, we would sit eating our rice in our remote backcountry campsites, we would count the bears we saw strolling past our tents (seven at one time was the record).  Then myself and five companions were charged by a coastal grizzly in 2009, somehow escaping injury. The fear came back. Now that I live in a place where they are rarely seen, I'm more nervous than ever.

However, this nervousness is confined to the night, when I'm in a tent. For some reason, I don't get scared hiking. I realize this makes no sense.

Even though I'm afraid of bears, I still go out. This summer, if you can call this desperately rainy, cool weather as summer, I've been out a lot alone. The trails are deserted in direct contrast to prior seasons. People are going to warmer, dryer places. This has led to some long and beautiful hikes and runs in solitude. 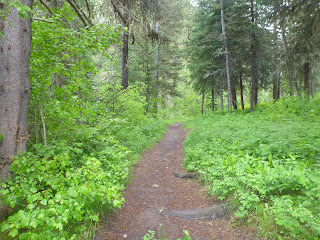 Yesterday I headed up from the "green gate", a typical running and walking route that gets you up to the moraine quickly. It's a local favorite that gains only 800 feet to a beautiful plateau. Due to the record-setting rain, the grass was nearly higher than the dogs.


I heard a stick break in the woods and thought it was Ruby, so I called her (I try to keep her in sight at all times). To my surprise, a large bear emerged from the woods and loped across the trail, just feet away.

When you're not used to seeing bears anymore, there is a second of disbelief before your mind can process what it is. The dogs were up the trail, between me and the bear, so I decided to go after them to make sure there weren't any bad outcomes. As I cautiously moved up the trail, I came upon a recently dead fawn, still warm. It was obvious the bear had been lurking near the carcass.

This is pretty dangerous, and it seemed prudent to withdraw. 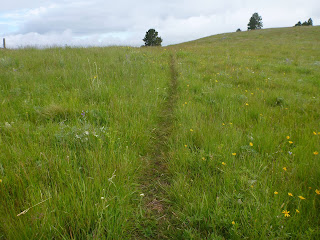 Even though it was a nice day on the moraine. Sort of.

I really don't know how to get over the fear of night time bears. I'll continue with immersion therapy and hope it somehow goes away. In the meantime, I guess I'll dig out the bear spray and start carrying it.
Posted by Mary at 10:45 AM