On the PCT again (and panic packing)

I'm heading out this weekend to close the gap on a PCT section in Northern California. It's hard to believe, but after this one is done, I will have less than 500 miles left of the PCT to complete. That means I have hiked 2000 miles.

Flash and I haven't hiked together since the Great Yosemite Slog of 2015, and I'm looking forward to it. It's a true partnership--the hiking we did in the northern part of Washington stands out as one of my favorite times on the PCT. We get each other--even if we can get annoyed with each other at times, we accept our differences. That is the definition of a true friend!

My pack weighs in at 20.5 pounds without water for the first three day stretch, which is pretty good, even with a few luxuries such as camp shoes and a Kindle (I've pretty much gotten out of the habit of camp shoes, but decided since I am now wearing custom insoles that my feet may need a break. Plus, swimming!)

We are both panic packing. This occurs when you take out or throw in items based on your fears. Do I really need a wool hat in the summer? Rain pants or rain skirt? What if my feet hurt? Should I bring extra insoles? Do I  have enough food? Do I have too much food...and so on.

I should be done about the 11th and this blog will probably go dark until then, unless we pass through a town. I'll be back with many stories to tell.

This graph below from The Trek shows the difference in base weight between section and thru hikers on the Appalachian Trail. (Base weight is everything in your pack including the pack except food and water. My base weight is about 12-14 pounds depending on if I take luxury items or what season it is). You can see that thru hikers often have much lower weights. That's because they are out there for months and jettison anything extraneous. They also tend to take it close to the bone. Some are just one storm away from disaster. 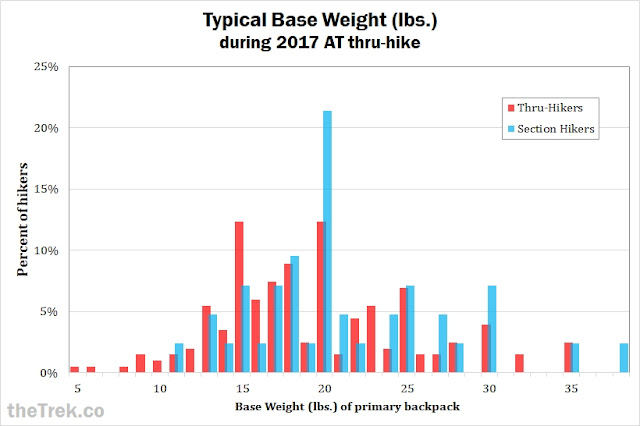