Proceed to the route

"Turn on the bridge," the Iphone voice insisted. Apparently the new roundabout confused it, and when I stubbornly headed toward Lewiston instead of the convoluted route that the GPS was trying to send me on, it fell silent, seemingly disappointed. Then it perked up. "Turn on Snake River Avenue!" it insisted. Why would I turn there? I wondered, I passed the turnoff. "Proceed to the route," the automated voice said meekly.

I've driven 1300 miles in a week, driving through four states. While the scenery was lovely, the company good, I was ready to be myself. With only one day off, I decided to carpe the diem and head to Bonny Lakes, typically a fairly easy stroll that can be done in a few hours.

Almost to the trailhead, I was stopped abruptly by a large tree across the road. Darn! But no worries, I would just park here and walk. I really need to start carrying a saw, though.

This trail has several significant river crossings, but all were doable. The real challenge came from finding the trail. I had been following a lone set of melted out tracks, but that person had missed the junction at 2 miles, so I was the first person to make it in here. Solid snow stretched as far as I could see. Even though I'm pretty good at route finding, there's always a sense of urgency when no trail can be seen.

But if you've done any trail work, you can look at a snowy forest and start to see the pattern. You can hunt for the ends of cut trees sticking out from the snow. You can instinctively see where a trail leads, through the open corridors, not through the brushy thickets. Very rarely is a trail unpredictable. It makes use of the landscape it traverses through.  I know a lot of people rely on a GPS app, and I can see where it would be valuable, but I like learning the land on my own instead of looking at a screen. (Driving is an exception. I drove across county multiple times with a road atlas. Even when GPS is wrong, it is still easier than trying to read that atlas at 70 mph).


There were a few points where I almost admitted defeat, as I began to posthole through soft snow. But I'm stubborn, and my bar for feeling uncomfortable on the trail as far as safety had not been reached (we all have our own bars. One of the reasons I didn't take anyone with me was because I thought others might want to turn around. That's not saying I'm better than anyone, I'm just more stubborn).

My patience was rewarded as Bonny Lakes, still partially frozen, came into view (and my hopes for backpacking there next weekend were dashed, as there was no snow free place to camp). There were no other souls all day, just my puppy and me. It was the perfect way to recalculate. I'm okay with proceeding to the route, for now. I'll go off the map again as soon as I can. 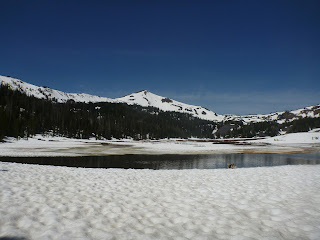