The last trip to the lake (for now)

Well, as it turns out, hiking 17, 27, 12, 28 and 26 miles in a row when you haven't been doing that on the regular makes you pretty tired for a few days afterward. I took two full days off from exercise, feeling a little slothful, but reminding myself that I had essentially backpacked a marathon three days in one week.

But the warm October weather drew me out. When my friend R suggested a hike, I selfishly suggested a flatter one. We hiked ten miles on the Hurricane Creek trail, which is not epic. I tend to avoid it in the summer, because it is where everybody goes. Close to town, relatively flat, and beautiful, what's not to love? But in October, the people are fewer. You can even go for a trail run without passing a horde of people. You can let your dogs run free without disapproving looks (there's no leash law here,  but some people don't like dogs). 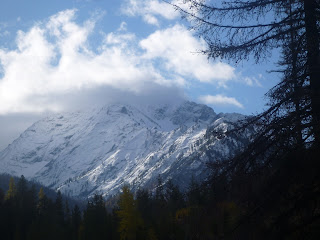 The larches have turned the color of sunlight. Golden aspen leaves litter the trail. It was easy walking. We paused at the five mile turn around, eyeing the sign to Echo Lake. Only another three miles! So tempting. But I knew that it wasn't in the cards. Darkness falls early this time of year. And the trail is steep and rocky, not something I was up for. Next time, we agreed, knowing it would be many months before we would be back.

I decided to go for a longer hike this weekend, the 16 mile round trip to Ice Lake and back. As I started to hike, I wasn't really feeling it. My legs felt like they weighed a million pounds, and I huffed and puffed up inclines that I usually spring up.

I'd just go until the snowline, I thought. I had been told there was a foot of snow up high. But when I got to the snowline, I couldn't stop. It turned out it only took me about ten minutes longer than it usually does to get to the lake. And it was worth it. 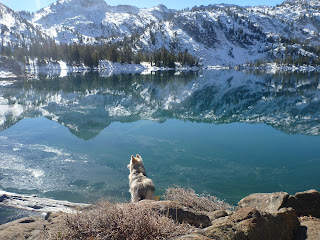 The winters are so long here. It's mid-October, and I won't be seeing Ice Lake again until at least the end of May. It's not a place to venture in winter--the threat of avalanches is too high. I felt a little sad, saying so long to the lake for several months. 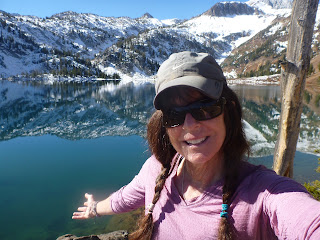 But, I was happy I had pushed through the malaise. I'm never sure if it's just laziness or something else that makes it hard some days. Erring on the side of laziness, I typically force myself to push through.

A few intrepid backpackers were heading in as I headed down. Since all the campsites were covered in snow, it looked like a cold night for them. But just like me, they were seizing probably the last warm weekend (I'm not so sure about hiking in jeans in the snow though. Please don't do this).

Maybe it's good that the trails close down in winter. I don't want to only have one hobby. Soon the snowshoes and skis will come out of hibernation. Even the ice skates could reappear. I'm planning my final PCT sections for this spring. It's time to let the mountains sleep.
Posted by Mary at 1:32 PM