News flash: it's not spring. And I don't really want it to be, not yet. There's plenty of skiing and snowshoeing left to be done. It's only January! Let's not wish time away. But sometimes, a person who has been in cold temperatures since November wants to feel a touch of warmth. So, naturally, you go to the canyon.

Oh, Hells Canyon. So alluring, so inhospitable. We drove into the sun, where the temperatures were forty degrees, a heat wave. T had struck out cross country from the Hells Canyon NRA sign, off the lower Imnaha Road, several times before, and she proposed a quick warm-up hike to the Imnaha River from there. Sure, I thought, how hard can it be?
As I should have known, when you ask that question, it always is harder than you think. Ill-advisedly wearing my trail running shoes, I picked my way cautiously down a steep chute, following my more sure-footed (and hiking booted) friend. A lot of it required the technical butt-slide maneuver, and I talked myself through the scree sections. Rocks tumbled with abandon, taking me with them. Some inadvertent hand placement on cactus occurred, and much skidding, but we finally emerged on a small, frosty beach. 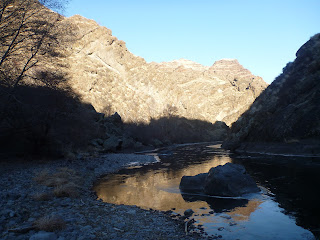 "I think we came down a different way before," T said. No doubt! "You know, there are easier ways to get to the river," I said, notably driving to it. But there's something grand in knowing you are standing in a place where few have.

On the way out, we began by climbing the gatekeeper cliffs above the river, but soon fear drove us from those heights--the scrambles were too death-defying. Instead we contoured around and found a deer path that took us back up to the road. Much easier! However, our "quick warm-up hike" had taken a big chunk of our day, leaving us only enough time to explore a powerline road for a couple of miles. 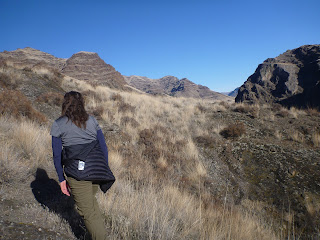 Still, it's good to be flexible in the outdoors. We stripped down to one layer, unfathomable in January. That's why I love the canyon. I always emerge a little beaten up, but the canyon slowly unfolds its secrets for those who try hard enough.