We arrived at the parking lot to find a huge amount of no snow--and no people. Where was everybody? The snow was perfect! Then I remembered--it's Monday!

Though it's no fun being told that your job and salary are on hold for a higher purpose, this furlough has been eye-opening for me. I have never had this much time off at once. Even as a seasonal worker, I didn't collect unemployment like most of my peers. Instead, I moved across the country to get a winter seasonal job. I've never cashed an unemployment check--mostly because I felt an obligation to work if work was to be had. (There's almost always work.) My co-workers would return with glorious tales of skiing in Peru, hiking in Australia (Wait. I did take the winter of 1988 off to go hike in Australia. I didn't get unemployment though.).

So even though there are financial worries from not getting a paycheck, I get it now. The far off galaxy called retirement is going to be great! I just need to get myself there in one piece.

Which might not be as easy as it sounds. L and I went skiing again, and it was only partway up the climb that she casually mentioned that we would be returning via the downhill ski area. "I don't think I can do that," I sniveled. Going down a run on cross country skis? "You can," she assured me. As it turns out, no, no I couldn't. After terrified snowplowing, rocketing down the slope at great risk to the dogs ahead of me, and finally giving up and carrying my skis down a ways, that is one I can check off the list of Never Again. (L hasn't called me to go skiing again. I wonder why.)

Another day I snowshoed up to the backcountry ski hut with some skiers. As the only snowshoer, I was able to keep up with the skiers on the ascent, but the descent was something else entirely. I left earlier than they did, taking the more exposed summer trail. Fifty mile an hour winds threatened to knock me over and had erased our earlier tracks. I staggered down the trail, thinking how this would not be the idea of fun to most.
The snow has been so deep that if you only ski on weekends, you can't keep up with making the track (we are at 93% of normal for snow). I headed up the Devils View trail hot on the heels of a snowshoer. I came upon him at the top, giving up and turning around. I was on my own, pushing snow with my skis.

So while I would rather not be dipping into my savings to pay the mortgage, I get why some of my fearless friends have decided to play now, maybe work later. It's strange to step out of the accepted routine--work, work, work--for just a little bit. I have kept myself on a work routine, sort of, by working my second job--writing my next book and promoting the older ones. But freedom, my friends? It's intoxicating. 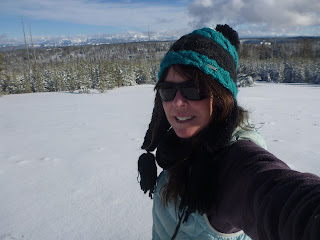