leaving fire (for real, this time, for sure, positively. I think)

"You don't need to take the pack test," the coordinator said. "Not if your highest fire qualification is ABRO. In fact, you're not allowed."

I sat there feeling a little tearful. Not take the work capacity test for firefighting? I had taken one every year since 1986. (Now is the time to say that when I was a lot younger, I used to think it was cute and adorable to chirp, I wasn't even born then! when people would bring up a date far back in history. Sadly I now see how annoying that is. Please don't do this.)

Let me explain(long backstory, skim or skip if you know this). My first "permanent" job was as a wildland firefighter. Before that, I worked seasonally as one. I also mixed in some years on a trail crew and as a wilderness ranger, but back then it was all hands on deck. If a crew was going out, everybody who could swing a tool went out, whatever your job label was. (This has changed now.) For the years that I was in "full time fire", I worked on fires twelve months out of the year. Even after I jumped ship to recreation management, I was recognized for having lots of experience, so I went out a lot. It was only when I moved to my current location things changed. A combination of my job situation (not a ton of support for it) and the fire organization here (heavy on the men component, not very interested in outside help) that it changed. I lost a lot of my qualifications, keeping a handful, one of which is ABRO (aircraft base radio operator), but I always had line qualifications, where you actually trudge out on the line and dig, until now. In order to do that, you have to take a work capacity test: walk 3 miles in 45 minutes or less with a 45 pound pack (harder than it sounds).

We're all caught up? Good. Anyway, this would be the first year in (gasp) 34 that I wouldn't be taking the test. And I am thinking of not keeping the ABRO; it's interesting but mostly sitting with a bunch of radios. I do a lot of sitting in my real job. So that would mean no qualifications in fire at all. Giving it up. For good.

When I mention this to people, they say things like, "you haven't really gone out in a long time." "That was a long time ago that you did fire." "You have other things you like to do with your time." All true. But it feels strange to let it slip through my fingers. Something that has woven itself into your identity, even if you no longer actively pursue it, is hard to let go. My letting go of marathon and half marathon running was the same, even though I knew that in order to still run in advanced age, I had to do it.

Another thing is that in letting go, I feel like I am leaving Roger out there on the fireline. Which is silly too, since he died on the line in 1994, a lifetime ago. If he were alive today, he would be happily retired. Staying tenuously connected to firefighting feels like I can still see him, that he is not fading from memory.

Letting go of things you used to do feels like a retreat, a concession to aging that I don't want to admit. At the same time, you have to know when to call it. I don't know why fighting fire was so important to my identity, I wrote a whole book about it and I'm no closer to the answer. I don't know why it still feels so relevant even though it's been years since I hiked on the line itself. I don't know why I still feel like that girl with a braid carrying a pulaski, a girl who would rather be nowhere else than where she was.

But still. Part of life, if you are going to stay interested and interesting, is evolving. Getting out of ruts. Getting away from "used to be" to "am." I'm fascinated to see where I decide to go. 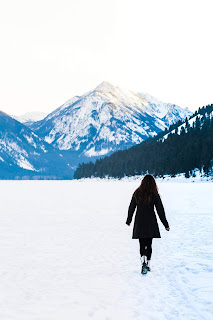 Into the future, my friends.
Posted by Mary at 7:27 AM