I trooped into the physical therapy office. All around me people moved slowly with canes, and I felt a little out of place as I bounded along on the elliptical trainer, "warming up." I would be remiss not to speak of adventure's darker side, which are the little, non-surgery-warranting issues that can crop up. Mine are the result of a trail running fall years ago, which somehow convinced my glutes to "not activate." Why things don't activate is a result of stronger muscles taking over when they shouldn't, and also, scar tissue.

My PT approached me with the dreaded Graston tools. These instruments of torture, which I have written about before, break up scar tissue. She ran one tool along the side of my hip, and I could feel it, a crunchy sound. Scar tissue can help a person initially but, ultimately, it's bad. Graston tools, foam rollers, little cork balls--any of these things can break up scar tissue. Then the affected part can move more freely.

"Your IT band is the victim here," she said. I had always thought the opposite--that the problem originated there. Dumb IT band! I had spent hours torturing myself with foam rollers and stretching, when instead it was my hip. Armed with a resistance band and some stretches, I bounded back out of the PT office.

To take this into a tenuous metaphor, I think all people of a certain age are walking points of scar tissue, although they may not know it. The scar tissue that is emotional can't be scraped away with a Graston tool. How does it hold us back?

Anyway, at least the physical part we can fix. I now am walking around with activated glutes, some KT tape along my IT band, and a happier outlook. Bring on the adventures. 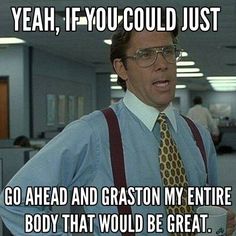