"It breaks my heart," C says. He surveys the sea of tourists in the restaurant. "And I'm really angry," he added. "I miss the old days."

The old days he is talking about weren't that long ago. I've lived here long enough to know some of them, but not the way he does. "I grew up here," he reminds me. He remembers how it used to be.

This is something we are all struggling with, those of us with a little bit of stake in this place. It is changing rapidly. Last weekend as three of us hiked across the mountain range, something we had wanted to do for a long time, we encountered three women doing the "Backpacker Magazine loop."  Really? Later,as we descended from Horton Pass to the other side, we descended into crazytown. Tents perched five feet from the lake. Many occupied campsites. People with horses. People with dogs. Still less people than in most backcountry places, but still. Too many people for us. 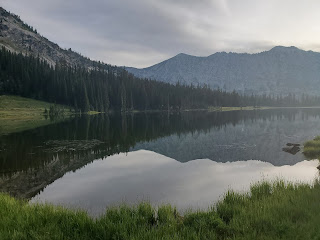 Night number one, though, was at a lake only occupied by one other group, slightly smoky from a lightning fire. My friends slept in, as they do, but we left camp before ten, always a win. We climbed up over the pass to the lake I mentioned before. On the pass, it was peaceful, but at this lake, not so much. 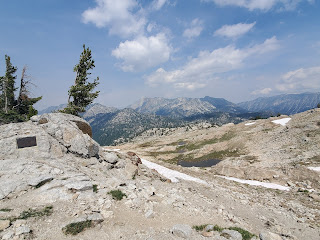 We had meant to stay here but we looked at each other with the same thought in mind. "I can't deal with Mirror," A said, and we headed to a less popular lake, which we had to ourselves. There are still pockets of solitude here, which makes me hopeful. 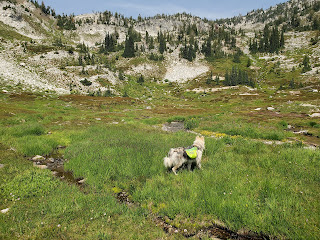 The next day we headed down the most popular day hiking trail there is here. When I say most popular, I am not talking 100 people or even 50 (I know, I am spoiled) but maybe 25 people, which to me is way too many. We braced ourselves, but the trail was strangely empty. And I know I can't move to a place and bar the door against others. By coming here from somewhere else, I am part of the problem. Not to mention, we all live on stolen Nez Perce land.

But still. The wilderness endures. We completed a traverse of the mountains, south to north, that we had wanted to do for years--thirty miles, three people, two dogs. These are the good old days. 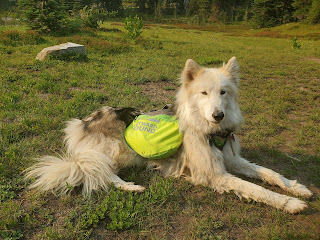