It is suddenly fall, and it looks like it might be an early winter. There's snow in the mountains, which I'm trying to appreciate.

The truth is, I can see why people hate summer, if they live in a broiling hot place.  In Florida, we breathlessly waited for the cooler weather to come and free us from the stifling humidity. But an alpine summer us nothing like that. In summer here, we have to carry our puffys because the temperatures drop low as soon as the sun disappears. We don't need air conditioning. There are hundreds of lakes to jump in. The only problem is, alpine summers are way too short.

I've been doing more trail running since the fall days have been spectacular. If fall lasted forever, that would be fine with me.

The other day Ruby and I ventured to one of the most popular trails around here. It is one I've had to give up in summer. There's just too many people. But now, in fall, the trail is ours again. The aspens are turning and the larch aren't far behind.

We ran up the trail and it was one of those rare moments when  running felt easy, the way it always did in the past. The dog bounded in front, her fluffy tail a flag.

Sometimes I think about my competitive running days, when nothing hurt and I was fast. That didn't last either.

But right then, I was just glad I could still run, even though my former self would have disdained my short distance and slow pace.

It was perfect. Even if it doesn't last. 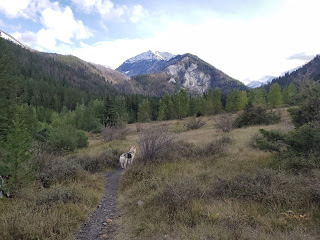 Take me to the river, part 2: What really happened at Government Rapids

There are a handful of Class II rapids on the San Juan river, and we run them all successfully, all except one. There are also what are termed "riffles." I run a couple of these in an inflatable kayak, and while I have to dodge a few rocks and ride a few wave trains, they aren't anything too scary. However, the river is low, 1300 cfs, and I learn that makes it "bony"--more rocks showing than when the water is high.

When we pull over to scout Government Rapids, a Class III, we notice we have company. A group we have seen before are taking a packraft up to run it again and again. I've realized that rapids aren't really my thing; I'd much rather just float down a lazy river. But here we are and we have to get through somehow. This rapids looks bigger and scarier, rocks sticking up like teeth. There is a trail around it, and my intuition tells me to walk around. But I don't. However, none of us are up for taking the inflatable kayak through, and a happy member of the other group says he will do it for us. There's no shame in this.

The lead boat makes it through without any trouble, and then it is our turn. I perch on the front of the raft, without much to hold on to, but I've been fine in other rapids, so I should be here. We negotiate the first turn, and then suddenly we are balanced on a rock. I have a sinking feeling, and only have time to say, "Rock!" before it happens.

As the boat bounces over the rock, it hits the trough behind it. I am immediately thrown out. I go deep into the water, my head smashing onto a rock. My PFD brings me to the surface and I swim the rapids, doing what I've been told to do, taking deep gasping breaths for air. Somehow I avoid all other rocks and swim out to the beach below. Somehow, inexplicably, I am fine. My head hurts and I will have a huge bruise, but I am fine.

I don't blame the rower or the rapids--it was just a  mistake. While you don't need to face a life threatening experience to know this, I am reminded how grateful I am to be this age, with a few aches and pains, but otherwise healthy and privileged enough to do this kind of thing. But there's not going to be a lot of rapids in my future. Been there, swam that.

Take me to the river, part one

The river is a muscle. We float along it in our rafts for nine days, the flow almost faster than I can walk. Faster than I can swim, too: One night I put on my fins and wade out, trying to swim against it. I wind up swimming in place, unable to advance. Once I jump in with my PFD and simply ride the current, swept down through towering cliffs.

The sun is unrelenting. Temperatures along the river rise to above one hundred degrees. Some nights, it is too hot to sleep, too hot even for a sheet. We slide into the blissfully cool water as much as we can, spending most of our days soaked. The river canyon bakes, the only relief the water and the occasional hackberry tree.

The silence is a sound itself. We see few other river parties and create river names for them: the Party Barge, the Kids, the Old Guys. We see bighorn sheep, deer, a ringtail cat, and a bird of prey swooping down to capture a smaller bird right in our camp. We slow down to river time. 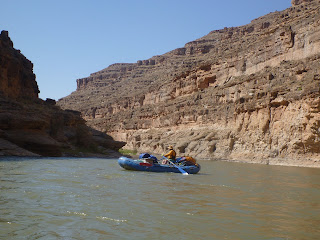 When I was first invited on this San Juan river trip, I didn't want to go. River trips weren't really what I wanted to do. The rigging of the boats, the unloading and loading of gear--so much gear--seemed interminable. There was a lot of sitting around in camp. I fretted about exercise, not just exercise but an elevated heart rate, which my body seems to need on the daily. I had only done overnight river trips, and most of my paddling has been on the ocean. What did I know about rivers?

As it turned out, river time is magic. Slowly you begin to unwind. I was able to sleep, the sound of the current running through my dreams, in a way that escapes me in real life. I was able to let go of the thread of anxiety related to work that pursues me in real life. Every day we packed our gear and floated around the next corner, every day we picked a different camp based on its attributes. A riffle for playing in with the stand up paddle board, a sandy beach for sitting, a trail to hike. 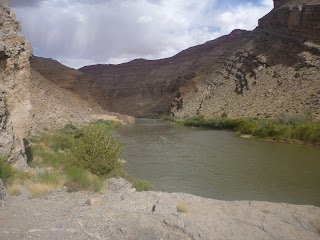 Will I become a river runner? I don't think so. At my heart I am more terrestrial. But I succumbed to river time. "You all look so relaxed," Robert says when we return from the Clay Hills takeout. And we are, eighty-three miles later.

Hey friends, I've been on a river adventure,  and will write about it in a couple of days. Until then, here's a photo of where I was: 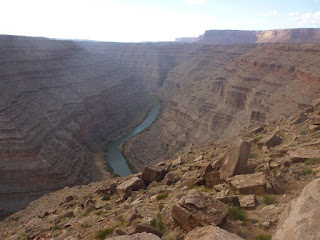 On September 13, I will have 30 years of working for the government. Thirty! I started pretty young but that still makes me feel exceptionally old. In that time I have;