When would you turn around?

As I hiked toward Ice Lake, the first people I had seen all day were coming down. "It gets worse," one of the twenty-something men warned. "But we did it without snowshoes," they added helpfully.

It was November, the latest I had ever attempted to reach the lake. I hadn't expected to make it this far, so although I was carrying all the winter survival gear, I had only a couple of protein bars. Who ever heard of making it to Ice Lake in November? But here I was, trudging through a few inches of snow.
I was the only person up here, and as I climbed I thought about Rachel and how the last people to see her alive told her to turn back. Would you have? I've encountered people warning me about all sorts of hazards ahead, and mostly they turned out to be benign (to me at least).  A couple of guys said the way ahead was impassible near Canada on the PCT, and Flash and I found it to be not bad at all. On the same stretch, a woman said there were big holes in the trail, holes we never found. I probably feel more comfortable than most people on the trail, but I still weigh what others say.

It turned out that while the trail did get snowier, it wasn't really "worse".  I was glad I kept going, and made it to the lake, probably one of the last people to do so before winter brings too much avy danger. However, standing at the lake, I could feel the mountains' indifference. Just as easily as this nice sunny day, a winter storm could blow in, obscuring the way down. Part of the bargain you make with wilderness is that you aren't in charge. 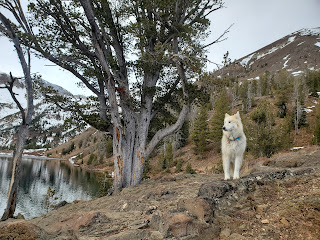 I didn't stay long at the lake. It gets dark so early. Feeling chased by winter, I bounded down the rocky switchbacks and felt relieved to be at the car three hours later, feeling tired and "hangry". That was sixteen miles I hadn't expected to be hiking. 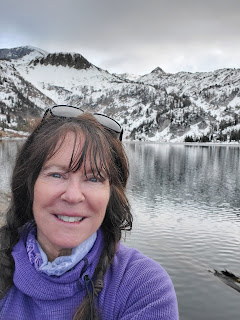 Being able to hike through November has been the one thing saving me from being grumpy about the change of seasons. Though we didn't have a fall in September, we are having one now. I am trying to get to as many places as I can.

Have you ever turned around when someone else advised you to? Or did you continue?