Strangers on a plane

The worst part about traveling for a fun trip is the airline travel! I meet my friend P in Phoenix. "I'm driving everywhere from now on," he says. I nod, having just experienced being cooped up way in the back of two planes with people who don't move until the row in front of them has stood up.

Sometimes I meet interesting people on planes. And sometimes there's nice views, like this one. 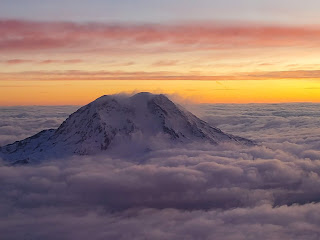 This summer, a couple friends will be climbing this mountain. I've never been compelled to do the ropes and crampons thing. I'd like to hike the trail around this mountain though.

At least, air travel gets you to fun places relatively quickly, and so here we are, on the Grand Canyon rim in the midst of a winter storm. Optimistically I pack my hiking skirt. I wonder if I have enough layers. I look at the woman in front of me on the plane. She has false eyelashes that look like caterpillars. Why? But then I tell myself not to judge. She probably gets as much joy from those eyelashes as I do from hurtling myself down an icy trail to camp in 40 degree temperatures.

Before the days of social media, I only saw them occasionally. Women in the backcountry with perfect hair, wearing white (!) T-shirts, looking immaculate. Meanwhile, people accosted me with, "You're looking a little rough from your travels," or "Did a bomb blow up next to you?" Much like in real life, I have never been able to achieve a smooth ponytail or a model-like appearance.

I laughed the other day as I slogged up a road in the snow, realizing that everything I had on dated from the late nineties or early 2000s. I often hit the post office in a puzzling combination of shorts and Uggs knockoffs, because I have come from the gym and forgot to bring clothes to change into. My hair doesn't have highlights. I'm a backcountry disaster!

Does it matter? No.  But sometimes seeing posts of women hiking with their hair down and rippling makes me wonder. Because I'm interested in the Tanner Trail and the Escalante Route in the Grand Canyon, I watched a video two women shot over four days of hiking. They had their hair down the entire time. Fifteen minutes of that and I would be reaching for the scissors, or end up with a bad case of dreadlocks.

I'm not writing this because I feel inferior. I probably could keep up with most of the women I see posed artistically before a nice view. It just seems like such a divide though. Where are my rumpled sisters? Am I the only one who can step on a trail, fairly well hairbrushed, and immediately look like I have been out for days?

I don't lie awake at night thinking about this, honestly. It is just an aspect of the outdoors that I am starting to see in more profusion lately. I've always gone to the wilderness because it doesn't matter what you look like there. Not like in real life, where women always get silently or not so silently judged for their appearance.

So don't worry, my selfies will always show a mess. But, an incredibly happy mess.

The tyranny of planning

We debate, and it becomes clear that section hiking is way more complicated than just doing the whole Arizona Trail at once. But we have jobs, and I'm also not convinced I want to section hike another entire trail. To do that, you have to be incredibly committed, focusing just on that trail, and walk sections that are...well..not so great.

So maybe not the whole trail. But perhaps I will become more like my friend Beekeeper, who because life is short, chooses trails that are "cherry picker delights". Thus the debate raging over the interwebs, while TC and I try to find someplace to hike in February.


Losing Callie has reinforced that I need to live a life of adventure, as much as I can. Who knows how long we have left?  I'm reminded of a friend who refused to plant trees at his house, reasoning that he hated his job and planned to move soon. Ten years later he was still there, hating his job and with no trees. Another friend wanted to travel, but said he wanted to wait until he had a partner. Thirty years later, he hasn't gone anywhere.

When I hiked the PCT, it became apparent that there were two main types of people. There were the planners, who created elaborate spreadsheets of how many miles they would hike each day, how much water they would acquire at desert streams, and where they would send resupply boxes. Then there were the Wing Its, whose mantra was "the trail provides". (Interestingly, it often did) These people rarely consulted maps, had  no plan beyond the day in front of them. Useless to ask where they planned to camp that day. The result would be a confused look, and a "I'm just going to walk until dark."

I fall somewhere in the middle, mostly because my work schedule dictates it. If I had a free six months, it might not matter and TC and I could just fly to Arizona and figure it out. We go back to the guidebooks. We email anyone who might know the answers, who could possibly predict snowline in February. It's all kind of ridiculous, but it is the fate of a section hiker.

Are you a Wing It or a planner? Do you cherry pick the best locations?

Trigger warning: if you've lost a pet, you may want to skip this post.

I lost an anchor this week. I've always known that my pets are why I don't go off on long adventures lasting several months. It's hard sometimes to go places and find people to take care of them. But it is also impossible to imagine life without them.

Callie was the world's biggest scaredy cat. For years, everything frightened her; loud noises, dogs, the outdoors, people. She was a tiny shelter kitten who endured several moves, including a three day trip on the Alaska Marine Ferry, which is not fun for pets. In the final move, she decided she preferred staying upstairs and so she did, sometimes looking over the railings as if she wanted to come down. For special people, she would timidly venture downstairs. 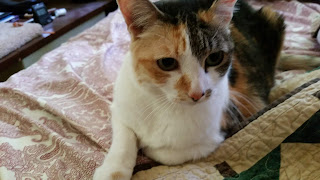 In the last year of her life, Callie found bravery. She marched downstairs, hung out with the dogs, and even went outside to the garden. Sometimes I was annoyed, because treating her hyperthyroidism took expensive medicine that had to be administered twice a day, hampering my adventures. The vet couldn't figure out why she threw up so much, and of course she always chose the one rug in the house. But even though something was obviously wrong, she rallied several times.

Until she couldn't. Her last night she came and laid on me like she used to do, and I think she was asking for help. I won't write much about her passing because it's too painful, but it took a long time for her heart to stop. "She's a fighter,* the vet said, which made me sad but it was true, she always was. Finally she let out a sigh like she knew she could go.

Despite the challenges she endured, dogs, a pushy young cat, being poked and prodded with medicine and fluids and pills, she was resilient. She taught me a lot. And one thing was true to the end: she had a strong and brave heart. I'll miss her.