It can't always be spectacular

"Okay, Red Riding Hood," J said. I had just finished listing all of the reasons why I couldn't think of a good outdoor adventure. I laughed, because I was sure he meant Goldilocks, but that didn't lift my sullen mood. I don't need conditions to be just right, but the combination of ice and high winds wasn't overly appealing. Slog up Mount Howard? But, thirty mile an hour winds and no views. Ski? Not unless I want to break a leg on the icy snow. Run? See skiing, above. But then again...I had been sitting at work all week. It was time to do something, even if it was wrong.


Each winter I tell myself I need more indoor hobbies. My mood should not be so tied to the weather. So I made some bread: 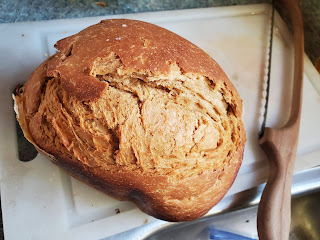 And thought about my next book, which is a toss up between adding to my national park seasonal worker essays, a new novel about TB sanitariums in the 1940s, or stories from the PCT (these ideas keep ping-ponging in my head with no resolution). Then it was time for a more ambitious project!

J rolled his eyes. "You had all day when I wasn't here to do that," he said. Then infuriatingly he picked up the harmonica and was able to play a song. What's up with that?

OK, so there was always reading. I picked up my current book, The Sun is a Compass (highly recommend). All that did was make me feel lazy in comparison to those adventurers. That led me into a rabbit hole of planning some fall trips. Tanner Trail to Beamer to the confluence of the Little Colorado, anyone? "That Beamer Trail was the hardest trail I ever did," T tells me later, at the pub. He was twenty then, in the 1980s. I reconsider.

I've tried other indoor hobbies. I foisted homemade soap on unsuspecting relatives for a while. I tried making jewelry, until I realized I am not much of a jewelry wearer.

I sulked around the house, feeling as though I had wasted a precious weekend day because I hadn't done anything spectacular. Which is silly, because it won't always be spectacular. That is what you don't see in social media--the days when people have headaches, when they putter around the house, when they do chores. Let me tell you, I have plenty of those. Fortunately, I can usually balance those out with days that look like last Monday: 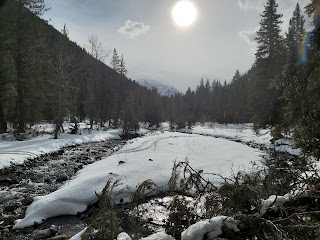 It was one of those perfect days when the snow and sun align to make for great skiing. The steep hills seemed gentle, the climbs not taxing. The sun, which has been notably absent, decided to show its face. Only one small avalanche had come across the road, and the danger seemed to have subsided.

On this day, though, I gave up and went to the gym. Soon, C came in. "This weather sucks," he lamented, getting on the treadmill. "I wanted to run up from the green gate but I didn't want to run in the ice." I was glad someone else agreed with me and I wasn't the only one to retreat indoors. We attacked our various cardio machines with as much enthusiasm as we could muster. It wasn't spectacular, but we did it.

Of the three choices I have listed, which book sounds more interesting? Do you ever go to the gym and then feel like you should have been outside?