Hiking the Arizona Trail, Passage 18: water in the desert

TC and I exchanged nervous glances. The road to Rogers Trough was rough, though beautiful, and we didn't want to be responsible for damage to our trail angels' car. I would have turned back miles before, I thought, but "Umbrella Man" kept going. "I'm not even in four wheel drive yet!" he exclaimed.

Finally conceding at a exceedingly steep and rocky stretch, our trail angels left us within striking distance of the AZT. A Jeep sailed by, its lone occupant stopping to ensure us that we didn't have all that far to walk. Choking his dust, we deduced that the AZT is probably not as well known as the PCT--there, a Jeep would have likely offered us a ride.

An unfamiliar sun settled on us as we hiked up the road, a plethora of Jeeps roaring by. Missing our turn to the trailhead, we stopped to ask one of them. "Oh, you're miles away," he said, before driving on (and not offering us a ride). Fortunately between our paper maps, an Inreach, and the Guthook app, we figured out that we were actually on the trail--it merges with the road. Not being purists, we decided that this was good enough and no need to go back miles to find the actual start. 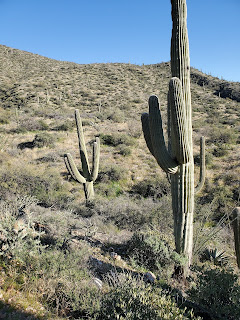 We were hiking southbound, Passages 18-16, mostly because of the difficult access and to avoid a long climb, which now became a rocky descent far down into Reavis Canyon. Burdened with 3.5 liters of water, I attempted to keep up with TC and failed. Several switchbacks later, we were on a flat and cruiser trail. I had been fretting over leaving my fleece jacket behind, but it was apparent that we had picked a great weather window. The late afternoon sun slanted butter-yellow across the saguaro cactus as we reached our dubious water source, a tank near a windmill.

TC peered in. "There's goldfish in here," she reported. A few cows loitered nearby, looking malevolent. As we pondered the likelihood of having to filter this water, a truck appeared, and the occupants gifted us with some cold water. Trail Magic! Shortly after, we met a Canadian section hiker, Hawkeye, who assured us that water was running in Whitford Canyon. Free from having to drink cow water, we made quick work of a few more miles, winding up just before dark in the canyon. 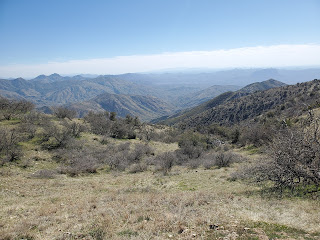 It was true. The recent rains had created a bubbling creek through rocky cliffs. How lucky were we, I thought, as I set up my tent in the falling darkness. The desert was incredibly green, with purple, yellow and white flowers of unknown names. Tonight we would sleep with the sound of water bashfully trickling over the desert floor.

The next morning, early risers, we were on trail before first light. Our first stop was to be Picketpost trailhead, where we would pick up water we had cached for a potential 22 mile water carry. Though I had started out in my puffy jacket, the day heated up quickly as we threaded our way out and up from Whitford Canyon into a stretch of rolling hills and a gradual descent. (Later I was to learn that both Whitford and Reavis canyon are notorious flash flood paths. Fortunately, we were never threatened.)

Though we could see Highway 60 for a long way, it seemed to take longer than it should to tick off the eight miles to relative civilization. We sat on benches drinking cold water and contemplating our life choices. We hadn't planned to do twenty mile days, but if we did another 12, we would end up at the famed rainwater collector--a structure that had been put up for AZT users and significantly assists with the ability to hike the passage we were entering. (If not for this collector, the distance without reliable water would more than double.) It was either carry 5 liters and camp shy of that, or carry only 3 and be able to hike faster.

Twenty miles, I hadn't done that since the summer. I knew that while I felt relatively fit, there would be some shock and awe associated with hiking that far with a backpack. In the end, though, I was up for the challenge. Shouldering our packs under a hot mid-day sun. we headed into Passage 17 and the unknown.

I sat among a mess of epic proportions,  feeling slightly ill from eating trail food (OK, Cheezeits) that I was supposed to be dividing into ziplock bags. It was time for section hiking prep!

"Why don't you just have a kit?" J asked as I threw gear about. Perhaps in another lifetime, when I have a house with more than one room, this could happen. Instead I am reduced to slogging to the shed in search of a vital piece of gear.

I had forgotten how much work it takes to prepare for a section hike, especially when not done solo. TC and I fire emails back and forth. Should we stay in Superior before the hike? Where can we leave our extra clothes? Was she bringing rain pants? Should we cache water or wing it? The prep is more exhausting than the hike.

I was beset with anxiety. What if the plane couldn't get out of the airport due to the forecasted winter storm? What if a rookie was again doing the de-icing, making me miss my connection? What was this nagging sore spot on the outside of my knee? "Could be a meniscus tear," Spindrift says helpfully, sending me in a panic.

All of this may sound so terrible that you might wonder why I even hike. I do too, sometimes. But I know once I get on trail all of this will fall away. I need a social media and life break. See you on the other side, friends.
Posted by Mary at 8:29 PM 12 comments:

return of the winter princess

The winter princess made a brief appearance yesterday. For those who haven't been reading this blog long, the winter princess is me, having a meltdown over difficult conditions. In this case, I was trying to side step up an icy berm on my skis to reach the trail. Not succeeding, I tried taking my skis off, only to sink knee-deep in the snow. Cue the princess!  "This is too hard," I whined. "I'm over winter!" 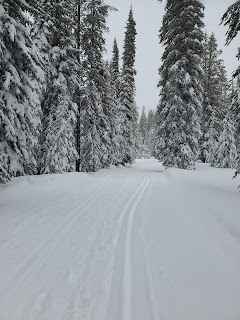 In addition to my woes, I hadn't brought the right gear for the conditions. It has been such a warm winter that I am used to skiing in tights and a couple layers. But in this ferocious wind, I was unprepared. I had to borrow some long underwear, and I wrapped a buff under my hat, adding a neck gaiter and a puffy jacket under my softshell. There was nothing I could do about my hands, desperately cold in gloves, not the mittens I should have brought. I'm tired of winter, I grumbled to myself. After all, it has been snowing since September. Shouldn't it be over by now?

When I finally managed to step up on the trail, I was annoyed with myself. I don't like the winter princess. Having a meltdown doesn't help the situation any. But as I skied along, a snowy wind buffeting my face, all the other skiers prudently at home, my fingers frozen, I wondered how long I had to be tough. All of those years on the trail crew and on the fireline, you were mocked if you showed any weakness. You had to acquire a tough skin and power ahead no matter how difficult it was. Is it ever okay to be a winter princess?

Maybe once in a great while, I thought.. Having a brief meltdown usually allows the frustration to dissipate and subsequent obstacles don't seem as bad.  Embarking on my second long loop, I realized I had switched out my insoles to the ski boots I wasn't wearing. No wonder hot spots were beginning to emerge on my feet. In the old days I might have just kept skiing and ended up with blisters. Now I think I know when to call it, so I headed back through the campground to the car to get the insoles.

The princess successfully banished, I returned to the trails. Only a few brave souls had emerged from the ski lodge. A combination of near-freezing temperatures, a snow dump of epic proportions, and gusts of thirty miles an hour had kept most away.  Feeling a bit vindicated, I tackled a more difficult loop, finishing without falling. The snow conditions were perfect. I didn't want winter to ever end!


Near the yurt, a lodge employee paused on his snowmobile. "What a great day!" he enthused. Yes, yes it was. It was a perfect day.
Posted by Mary at 1:50 PM 4 comments:

The inevitable presence of gravity

Sometimes it seems like winter is all there is, that summer does not really exist. That this is all there will ever be, the sound of our skis cutting through a light crust, snow falling lightly.  It is not unreasonable to think this, since the mountains have been shrouded in snow since September, and we have been skiing for over three months. February and March are usually the snowiest months, and it seems like this is on track for 2020 as well. 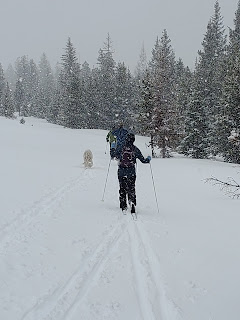 I strap on my gaiters, circa 1997. Unfortunately one foot strap has broken. What to do? I see one of J's gaiters has the same problem. So I take one of both. Though not stylish, I thought this was brilliant. Why buy new if you don't have to? 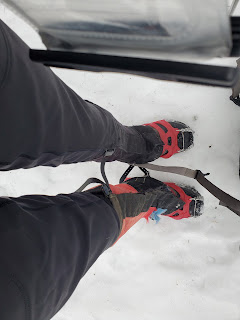 We head out on the trails. New snow has fallen over a crust, which makes the conditions fast but treacherous. The Devils View loop has some significant hills, but I have skied them before and am sure I can do so again. When I first moved here I was afraid of this loop, but now it seems less difficult. We find a friend skiing alone and loop her into our group. On the ridge, a fragile sun appears. 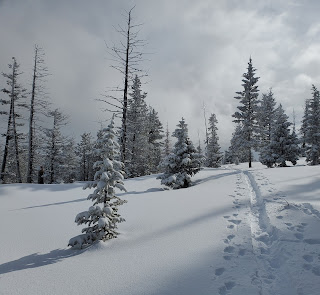 We are skiing through the cut-off when suddenly I fall. I'm not even on a big hill. I land awkwardly in a position from which it is difficult to untangle. It takes my companions to help me up. That is the only thing I have noticed about getting older: it is harder to get up.

We decide to do the loop one more time, to take advantage of the track we have made. "This is going to be fast," C says as she tucks into the descent. I hurtle along until I divot into the hillside. Another fall! This time my foot is bent back oddly, making it challenging to get up. I struggle to my feet, making a big crater.  C is waiting ahead so I ski on.

Finally we decide we've skied enough and head for the parking lot, down a final steep slope. You guessed it! I fall again! I have now fallen more times in this single skiing outing than I have in the past several years combined.

Covered in snow, I ski soberly back to the car. Sometimes the snow is like that. With three more months of winter, I have plenty of time for redemption.