Being outdoors is essential

As I write this, I expect my state to go into lockdown tomorrow. What this really means, I don't know. Outwardly, it is supposed to mean that you only do essential errands, but going for walks outside is okay. But how far can you drive to walk? To the county limits? Beyond if you don't stop anywhere? Nobody knows.

After a week of frantic conference calls, attended by people who were clearly unable to telework professionally, I knew I had to escape to the outdoors.  The drive to Cow Creek is a rough one, taking an hour to drive 15 miles, so I rarely attempt it. But the call of the river was too much. Arriving at the trailhead, I was horrified to see large groups of people sitting around in lawn chairs, partying. But fortunately few people were on the trail, and we all gave each other wide berths.

At the confluence of the Imnaha and the Snake, there were two other backpacking groups (it is rare to see even one other group). However, I knew of a secret beach, so I made my way there. Nobody was around, the sand was warm, it was perfect.

I wanted to see the stars, so I left the rain fly off. The temperature dropped into the 30s, which tested the limits of my backpacking quilt, but it was too magical to cover up. 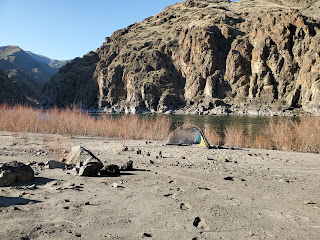 Before sleeping I took an after dinner walk. I had made the rookie mistake of bringing a stove but not fuel! And nowhere is open for me to buy any. Good thing I am experienced in the art of cold soaking. Bean salad for the win! 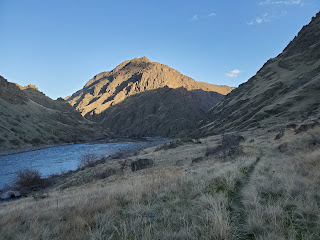 I always think that I will hang out in the morning and read but once morning comes I am ready to get going. I was packed and on the trail by 7:20.
The sun was just starting to peek out as I reached the confluence (tiptoeing past sleeping campers). 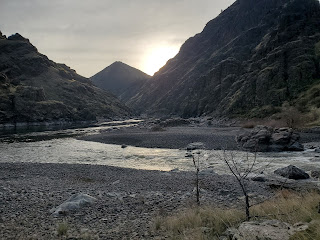 I don't know about you, but a 24 hour break from the news and social media was perfect. I wish I could go for longer. 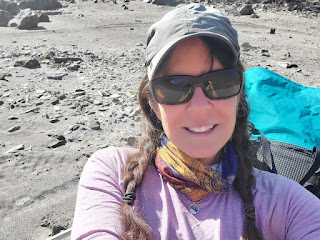