When I moved in to this neighborhood, ten years ago, my neighbor Bob was always seen out in his yard. He mowed, he weed ate, he pruned trees, he painted. He would sometimes walk over with a disapproving look, stating that I had missed a spot in my own mowing. He would, to my chagrin, sneak over to spray my dandelions. Bob waged a never-ending war against dandelions, and my yard and my other neighbor, Mike's, were a cross for him to bear. Sometimes he invited us over, and showed us his leatherworking. Other times I brought him cookies or cake.

Slowly Bob became more forgetful, and developed COPD.  He doesn't really know us anymore.
These days he rarely ventures anywhere except in the companionship of his caretaker to get groceries. He is rarely in his yard, except to ride his beloved mower. This is one of his favorite things to do, and he loved mowing twice a week, whether the yard needed it or not. In a fit of generosity, he began to mow my yard. Attired in a button-down shirt, jeans, boots and a cowboy hat, he made his careful way up and down the yard. It was his one outing, although we were told that it took a lot out of him.

When I came home from backpacking this weekend, I heard the news. Bob had been mowing and had gone rogue. He started mowing other people's yards in the neighborhood, and then had ridden his mower several blocks to the drive-in restaurant to get a burger. This caused great concern to his caregiver and his grown children, who don't live here. As a result, Bob's mower keys were taken away. He could fall, I heard. It wasn't safe.

This made me really sad. Bob's car keys were taken away a couple of years ago, and now his favorite thing in the world to do is gone too. I know why this happened, but it still breaks my heart.

We aren't here for a long time. Get out while you can. 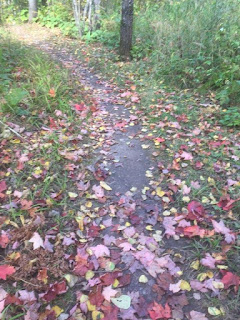