I was determined to get to Ice Lake. In the summer, this lake becomes a sacrifice zone; at only 8 miles, it is recommended over and over by well-meaning front desk people. And there is a lot to like. Though you do gain 3000 feet, there are switchbacks, and it can (and is) done as a long day hike often. Alas, because of the people, I have had to write this lake off in July and August. But surely in a high snow year, I could have it to myself in June. Optimistically, I set off.

I had asked a friend to join me, but she couldn't make it. And anyone else, I wasn't sure if they would be up for it. My trips tend to be spontaneous and full of doubt. Maybe we can make it to this lake, maybe we can't. Some people don't like that uncertainty. This was supposed to be an eight mile day, which is pretty short, but it ended up being twice that.

A pair of tents dotted the basin two miles below the lake, with nobody in sight. As I headed up the final switchbacks, snow appeared. A lot of snow. Like late May snow in mid-June. Soon I was uneasily navigating huge mounds of rounded snow, several feet covering the trail. A boot track led through it, but it was slippery and a fall would not be fun. I pressed on, the lake in my sights.


There it was, still mostly frozen. I knew there would be snow at the campsites, but this more than I imagined. A small patch of bare ground showed near the outlet. I hesitated. It was only one in the afternoon, and sitting for hours surrounded by snow didn't seem like a good time. Usually when I get to my destination that early, I set up my camp and wander around exploring. But the snow was too deep. It was time to retreat.

On the way down, two separate groups of people slogged upward, packs bristling with gear. Backpackers, so soon! Just a few years ago people stayed away for at least another month. I wasn't ready for them. But that didn't matter because here they were. I felt relieved I had decided to descend a thousand feet. All the tents would be crowded into the one small bare space.

I gained the basin and pickily searched for a campsite. The two women already camped there had taken the best spot, but I eventually found one, perched below a waterfall. Ruby and I explored up the the headwall, a place I had never gone because I'm usually in too much of a hurry. 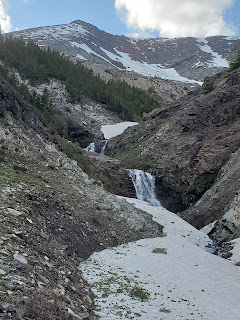 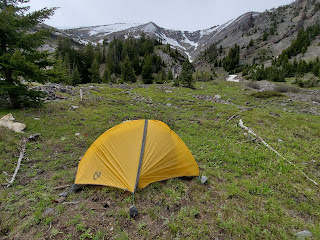 I had a realization as I sat lazily against a rock, reading my book. Usually I am fortunate enough to escape in the spring and fall to places not so frozen. It makes the extreme short summer worth living here for. This year I haven't had the opportunity, and it makes me a little anxious to see how fast time is going. I need to be out in it as much as I can. 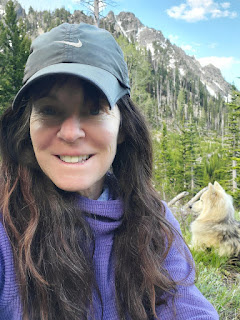