Live to hike another day

I breathed a sigh of relief. I had successfully, with a full backpack, crossed the raging Wallowa River on two skinny logs high above the water, each one barely the size of my foot. With renewed optimism that I could make it to the Lakes Basin, I marched to the next river crossing, only to stop short.

Deep, cold water swirled past. If I were to cross, I would have to swim. Upriver, the sketchy logs I usually counted on were underwater. It might be possible to cross on them--maybe. It was too much of a gamble. I had to retreat.

Of course, my alternate campsite, at Six Mile Meadow, was not terrible. I was the only one there, and the rock walls were reminiscent of a mini Yellowstone. The vast clouds of mosquitoes were the only downside. Later, two guys with several kids trailing along (well, the "kids" were were probably eighteen) appeared and built a fire. They told of an ambitious plan, to hike a loop that took in Glacier Pass and through the Lakes Basin back to this point. Good luck, buddy, I thought but did not say. The kids were from Texas. They had a lot of snow and water crossings ahead.

I had planned for two nights out, and the next morning I left my camp to see if I could day hike as far as Frazier Lake at least. The first few miles were basically flat, then climbing toward the water crossing below Frazier. I felt a sense of foreboding as I approached the river. This was the same river that had foiled me the day before, just higher up. Even in the best of times, this is a sketchy crossing, and it was clear today was not the day. Up higher, if a person were to scramble up the talus field, she could probably cross on a snow bridge. It's been known to be stable into July.

I thought about it. I could see snow covering the trail on the other side. I knew it was still a mile to the lake, and that mile was likely snow-covered. I thought about how beautiful the lake probably was, and how few would ever see it that way. In the end, I chose to turn around.
Of all of my hiking mantras, Live to Hike Another Day is the hardest one, that line in the sand difficult to draw. I always want to go on, see what's next, and to admit defeat is a hard thing to do. When I was younger I would have gone for it, but I'm perhaps wiser now. As I write this, two individual hikers are lost in Mount Rainier National Park. Some hikers have disturbing pictures of one of them glissading down a snow slope. I always carry a beacon, and enough gear to stay out overnight, but that doesn't help if you are caught under a snow bridge or swept away by water. 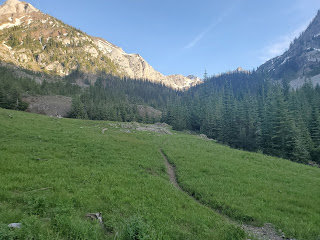 I returned to my camp to see the boys packing up their wet gear (though meadows are nice, I generally avoid them for the condensation factor). I headed in the opposite direction, back towards the trailhead. Maybe others would have crossed the river, but I was good with my choice.