It was A's 50th birthday and she was not happy. She had planned a vacation that wasn't happening due to Covid, and even a party was off limits (nobody felt OK about being indoors. I personally have not been in anyone's house except for my parents' since February). The weather was unsettled too, so her plan of having her pilot friend fly her across the mountains wasn't happening either.

"You don't want to...backpack, do you?" I tentatively inquired. The sullen clouds didn't promise a warm evening. Any rational soul would politely say no. "I want to wake up in the mountains!" she replied, and so we packed at the speed of light.

Due to work meetings, I couldn't leave until late afternoon. This negated any attempt at the washboarded Lostine Canyon road, which takes forever to drive due to the teeth-clenching, car tire destroying surface. We settled on Bonny Lakes, fairly close in (and I am naming this lake because it is well known and not a secret; durable campsites exist).

A chilly breeze at the trailhead sent me reluctantly to pants. I hate wearing hiking pants, but it was too warm for leggings and not quite warm enough for a hiking skirt--that fall in-between time that makes you pack a ton of layers. Due to the 40% chance of rain in the forecast, I had upped my wet weather game, everything wrapped in dry bags and ziplock bags. A had brought hand warmers. We were set, and off we went.

It's only four miles to the lakes, and a pretty easy hike. It is often done as a day hike, but you work with what you have. When darkness falls at 7, it is a good choice. We made it to the upper lake in under two hours and set up in time to watch a feeble attempt at a sunset. Elk bugled from a short distance away. The night was quiet and still. Also? I was glad I had brought pants. 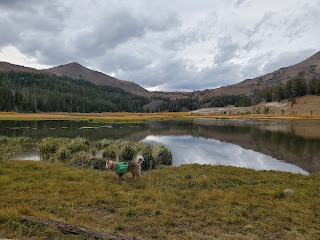 Water was frozen in Ruby's bowl in the morning, another sign that we are pushing the season. Another unmistakeable sign was the snow falling on us. While it wasn't accumulating, it was enough to get us moving; we had decided to tack on a day hike over the pass to a small tarn. Stashing our packs, we set out over the pass and into the teeth of a brutal wind. 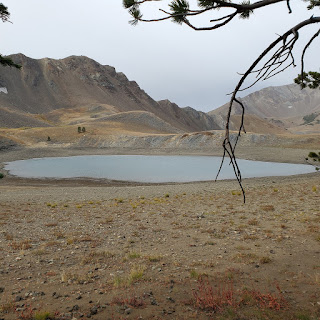 The wind gusts made it difficult to remain upright, and after some appreciative gazing at the view, we quickly retreated. The hike out went quickly and we arrived at the parking lot to see two men and  a boy getting ready to head in, unfortunately clad in cotton sweatshirts. "Tonight is going to be the worst night!" they exclaimed cheerfully. 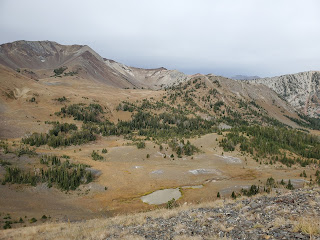 I guess I've become sort of a fair weather backpacker, because I knew I wouldn't be heading out into the snow and wind. But these were the kind of tourists I don't mind. With a warning not to ascend the pass until the wind decreased, we went our separate ways. I wasn't sad to be heading back to a warm house, but I'm not ready to give up on hiking yet. Even if it has to be in pants.

I collapsed in a heap at the shores of Echo Lake. How had a simple eight mile hike taken so much out of me? True, the last three miles are straight up, gaining  2300 feet in what the guidebook calls optimistically a "steep, eroded trail", but it had taken me two hours to gain those three miles. Was I finally getting slower? Was age finally catching up?

I couldn't deny that the hike was worth it. I've only been up here a handful of times, mostly because I have to wait long enough for the three miserable miles to recede into memory. This lake is only snow free for about two months, and sure enough some snow still hung on from last winter, and probably the winter before that. It feels like a long way from anywhere. 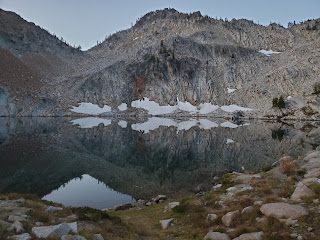 Motivation has been a little hard to come by these days. Not to get out in the wilderness, but for exercise in general. I've never lacked it, so it's puzzling why I don't feel like running or riding my bike. And today motivation failed me as well. My intent had been to set up a camp and climb the goat trail to Billy Jones Lake, and then pick a cross country route to the fabled Granite Lake, a place to where only three people I know of have been (and one is gone from us, I miss you, Ken). But because of my slothful pace, it was almost two pm. With the sun setting at seven, I knew that it would not be smart to embark on an unknown route this late. It was likely I could do it, but I didn't want to race the darkness. Granite Lake would have to wait for another year.

As I set up camp, I thought about how lucky I was this year. Unlike last year, when a huge snow dump closed the mountains to hiking in September, we've had mild weather through the month. A determined wind reminded me that winter is on the way, though. This year, I have been dreading it. Though it is a #firstworldproblem, I most likely don't have my mid-winter escape to the Grand Canyon, or a spring Arizona Trail hike, to look forward to. The months ahead look a little bleak. This wouldn't be so if we got good, consistent snow, but with climate change, we get cold and ice for months before a good base sets in. Those are the months where I will sit and wonder why I didn't go for Granite Lake.

But, you have to save things for another year. Instead, I lay on a big flat rock reading a predictable romantic comedy (I can't really read serious things right now). The sun was almost warm enough to pretend it was the beginning of summer, warm golden months to come.

But I'll get through winter, I always do. Without a winter escape, I'll have to come up with something else. I already sort of feel like writing again, which I haven't during Covid times.

Gaining the trailhead the next morning, I realized that I had been wrong. Because the unmaintained trail has swerved over time to bypass downed trees, it is actually longer. A mile longer! So my pace wasn't as dreadful as I had imagined. Irrationally happy about that, I bounded to my car, leaving the mountains until next time.

It was another day of terrible air quality. I lurched around the house with a headache; without air conditioning and the inability to have windows open, the air inside wasn't much better. My state was burning. I had to escape.

Clearing a few hours on my work calendar, I headed to the mountains (the trailhead is only six miles away, so I wasn't becoming part of the problem). My goal was to find the elusive Unit Lake, one of the few named lakes remaining on my list.

The smoke was thick as Ruby and I climbed the dusty trail. A few horses passed by, kicking up rocks and dust. Annoyed, I thought about turning back. But at three miles in, a wind kicked in, and traces of sun began to appear. Things were looking up. Plus, the trail was almost empty, finally the tourists clearing out. Soon, the snow will fall, so I had to take advantage of the still-warm weather.

The river was low enough to hop on rocks, and I climbed the final three miles to Horseshoe Lake. There was only one other group there, and I found the perfect campsite on a rock outcrop far from them. The lake was the perfect temperature for swimming and the smoke had cleared to reveal a pale blue sky. It felt good to breathe again. 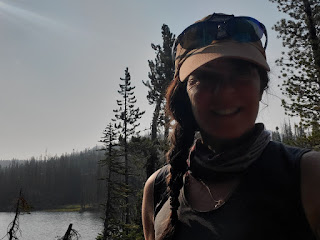 It was time to hunt for Unit Lake. I had forgotten the guidebook, but I had my map and Gaia GPS, so I headed confidently in the direction I assumed was right. It quickly became clear that even though this lake was only a half mile from the trail, it would be no easy stroll. I crashed through the woods until darkness caused me to retreat. Unit Lake 1, Monkey Bars zero.

The next morning I headed back, convinced that I would find the lake. I climbed up through a rocky cliff, crawling over downed trees. My phone battery drained rapidly (does anyone else have this issue with Gaia GPS?) and my map was nearly useless in the deep forest. I was about to give up when I saw the glimmer of water through the trees. Somehow I had climbed too far above the lake, but there it was.

Good enough, I thought. It was time to embark on the nine mile trip back to the trailhead, and climbing down to the lake would add considerable time to the journey. Sometimes you just have to call it.

Does this count as visiting the lake? Probably not. Probably I need to go back. The goal of visiting all the named lakes in the wilderness is arbitrary and I can make up my own rules. I have only heard of one person who has been to all of the lakes and he didn't go down to a few that he deemed too dangerous. So maybe this counts.

I arrived at the trailhead, enveloped in a thick cloud of smoke. I was back in the land of smoke. It's supposed to rain on Friday. I hope it does. 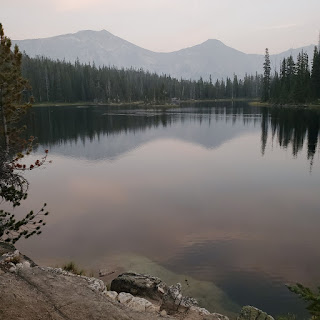 Growing up, whenever I saw someone running, I knew who it was. There were that few of us. There was K, who loped around the neighborhood in shorts with, inexplicably, nylons. There was B, an older man with a distinctive shuffle. A few others. Then there was my family.
We were an athletic family. We backpacked before it was fashionable, canoed, hiked, and of course ran. A day without some form of exercise was unthinkable. To this I owe my motivation today.
I went to my hometown recently. There are lots of runners now. We wouldn't stand out anymore. But I think back to the many icy, wind battered, snowy miles we covered and we weren't doing it for Strava or the Gram. Nobody knew our pace or how far we went. I like it that way.
My parents are private people so I won't say more than this. I feel deeply ashamed of complaining that I can't always do what I want this summer because I have to work, or it's smoky, or there's a pandemic. What I am seeing from them is courage in the face of adversity. I can only hope that someday I am half as brave.

Now, running is harder than it used to be. Stuff hurts. I am not fast. But I can still do it. I'm grateful for every step.
Posted by Mary at 4:30 PM 5 comments: