As I headed up the Hill of Death, I was aware of two things: carrying five liters of water was still totally doable, and my winter boots were no longer waterproof.

I was enroute to the ski hut to do some maintenance, and I figured I might as well stay the night. Even though I would be staying in the hut, it still seemed to count as a backpacking trip, since I was carrying all of my stuff. It would be...backpacking glamping.

In winter, the trail is fairly obvious. It splits into two routes, the winter and the summer trails. In winter, the summer trail is sometimes scoured clean by the high winds that always blast this mountain. In contrast, the winter trail winds through deep woods and is always full of snow. Either way, it is a slog, though considerably easier without snowshoes (or skis, but I am not a good enough skier to descend the Hill of Death, so I don't try).

In summer, the trail is a little more obscured, and I congratulated myself when I found the crux move, an unmarked turn off the ridge, a short climb across a two-track road, and then another climb to the next ridge. This was followed by a traverse across a steep slope, the place where the winds will get you if you aren't careful. Today, though, it wasn't bad.

Today the climb seemed easy, even with the water weight. In winter, there is snow to melt, but not now. Except there was. A thin blanket of snow lay on the roof edge, and Spruce quickly jumped into it. Avoiding his area, I scraped some snow into a couple of pots for melting. 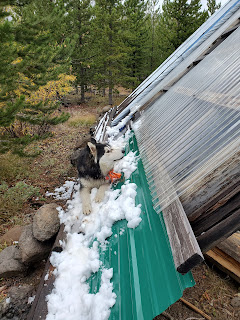 The hut had held up well over the summer, and the only work I needed to do was split wood. That is a task that I find oddly satisfying, so I didn't mind that previous visitors hadn't replenished the supply. I ate a wrap and stoked the fire as a strong wind buffeted the hut. This wouldn't have been a good night for tent camping. 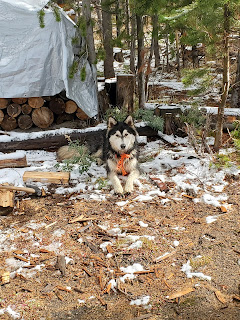 This wouldn't be considered glamping for very many people, but it was luxurious to not have the typical camp chores (filter water! Set up tent!) and to be warm with a fire in the stove. The dogs, despite having a whole cabin and not a measly tent, settled comfortably on my sleeping pad, refusing to share. 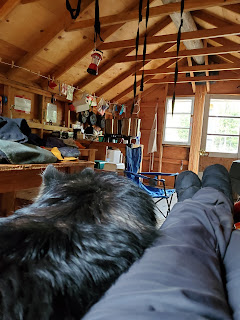 A strange warm front blew through in the night, bringing rain and snow to the mountains above. Whenever I am at this hut, I start to daydream about living up here. I think about the route I would take far down to the stream, to carry up enough water to survive. How I'd carve out a running route through the trees. It's fun to think about. 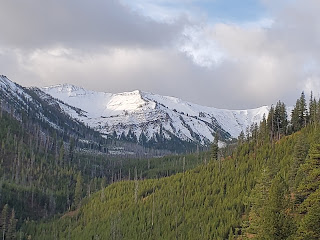