I nervously headed up the trail with two excited dogs. I had done day hikes and runs with Spruce, but always overnight there had been another responsible adult along. There are a lot of things to worry about with dogs. Will they encounter a bear? Will they bother other hikers? Will they tear the tent?

Speaking of tents, this was also the maiden voyage of my new tent. I had divested myself of a couple of tents earlier, so it wasn't as though I had too many tents anymore--ahem, four--but none of them would reasonably fit me and two dogs. Because the tent had to be light, I had plunked down a lot of money for a really nice one. Yes, I bought a tent for my dogs. 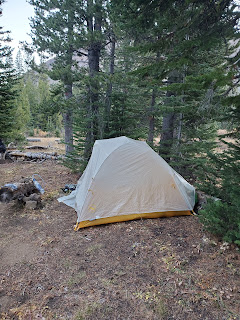 Happily, there were no hunter vehicles parked at the trailhead, so I abandoned my Mount Howard plan A and headed up McCully Basin. This hike is much better for a run than for a backpacking trip; it drearily climbs through the trees with no views. Even when you break out into the top of the basin, you have to trudge fairly high to get outstanding scenery. I admit to being a little spoiled.

But for a quick overnight hike, commencing as soon as I could reasonably dash away from my Zoom workshop (3 pm), it would have to do. The trail was empty and cold, reminding me that even to be able to do this in October was a gift. Many times, a September snow dump shuts the mountains down.

A wall tent was pitched near the water crossing, but no hunters appeared. Climbing higher, I found a spot that would work; it was only about seven miles but  I knew that  night was coming 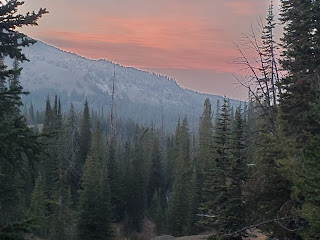 The dogs ran around chasing each other, entranced with the spot even if I wasn't. I stared grimly at the wet, dirty messes that emerged from the nearby creek. Well, tents were made to be used, weren't they?

Both dogs ran into the tent, not realizing that they would be trapped in there for almost twelve hours. This is what shuts down backpacking more than anything, the sheer boredom of sitting in a tent for what feels like forever. I will have to reluctantly return to day hikes.

An old hand, Ruby quickly settled at my feet and fell asleep.  Not so the puppy. His large ears perked up, he listened intently (pro tip: if you put the rain fly on, dogs can't see out and are usually much more content). Soon, though, Spruce lay by my side and didn't stir until the morning. 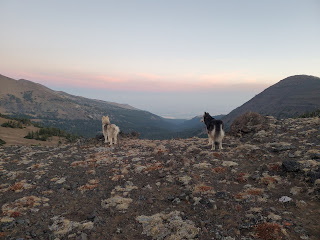 You can't sleep in with dogs in the tent. Once I woke up, they were ready to go. We climbed toward the pass, wanting to get a glimpse of sunrise. I could see down into Silver Basin and over toward the wild Nebo country. It seemed like we were the only creatures left on the planet. 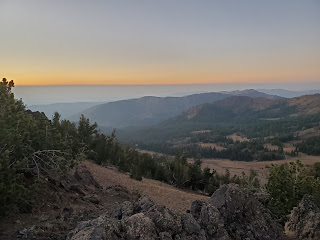 On the way out, the dogs stayed behind me, unlike their happy bounding on the way in. I figured that, like me, they were reluctant to go home. They wouldn't mind staying in the mountains forever.