Not the journey, it's the destination

Subject of many sappy memes, but I've always been a destination person. It's not that I don't enjoy the journey, but there's something about getting to a place that I like. It's why I slogged through some of the not-so-pretty sections of the PCT when others (perhaps wisely) called BS on the hot, power-line and windmill-filled parts (to be honest, I liked every part of the PCT, except the windy, hot, sandy hike to Interstate 10 in Section B California, or perhaps the endless descent into Belden Town.). It's also why in the past, I perhaps pushed on when conditions weren't right to do so (I'm better now).

I don't mind being a destination person. It's gotten me to some amazing places. However, I've been humbled in the last week, and had to turn around twice. The first time was after work, when we optimistically headed out for a quick ski. We settled on skiing up the Target Springs road, which entails a steep climb, but promised a fun descent. Arriving at the road, I was delighted to see that nobody had been on it. Fresh tracks!

It had warmed up and the snow seemed heavy, but I charged ahead with the enthusiasm of the destination focused. I was hoping to reach the high point, only about two and a half miles, but a worthy effort with the elevation change. I was happily breaking trail when I looked back. The dogs were covered in huge snowballs and could barely walk, but were gamely following.

I felt horrible. A few years back, my employer started what was often hilariously called either the "Safety Journey" or, even funnier, "The Safety Engagement." As with most efforts, it has faded into oblivion, but for months we had to earnestly sit in meetings discussing safety. One of the products of this effort were "Safety Cards". If someone in the group felt unsafe in an endeavor, they could pull the "Safety Card." Naturally, we adapted this to the "Safety Dog." If something seemed unsafe for the dogs, it was probably unsafe for us. Feeling bad, I retreated to the car with some snowy dogs.

The next time I turned around was a few days later. Hiking up Mount Howard is always a slog, and I've written about it before. I decided I was ready to take it on, having forgotten once again how hard it is. Setting out at the crack of dawn, I snowshoed happily on the first part, which had been beaten down by snowmobiles. At about the mile and a half point, the tracks ended. Deep snow ensued.

My snowshoes sank half a foot in the unconsolidated snow with each step. I slowly moved up the mountain at the blistering pace of a mile an hour. I ran out of water. A light snow began to fall. I trudged up to the first emergency phone box and stared up at the hill ahead. In normal times, this would have only taken an hour, but it had taken me two. At this rate, it would take two more hours to reach the summit. That wasn't the problem--it was facing darkness on the descent, and nobody was around for miles. I sighed. I was going to pull my Safety Card.

On the way down, the sun briefly appeared. The snow sparkled in the trees. I was disappointed that I had turned around, but I was actually enjoying the journey. Next time, I would make it up there. 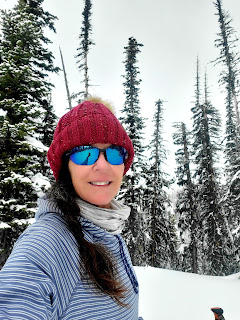