I fidgeted, trying to write a visitor use management plan for a forest. It was sunny outside, and torture to be in! Lately I find that it is never enough. I had already been for a run, so why couldn't I just sit happily? Yet, I could not.

Finally I gave up and grabbed my snowshoes. Earlier I had run up the road to Kinney Lake, only to find it completely drifted in. A brave soul had tried to four wheel it up the big hill and had failed, having to back down. I wanted to get to the lake--it's one of my favorite spots. Tonight, I would get there.

I parked at the base of the hill and trudged up, running into some ice fishermen I knew on the way down. "We tried to beat a path," they said, "but it drifted in." My snowshoes crunched in the crusty snow, and I could spy a kite up ahead. It had to be my friend out kite skiing.

I arrived at the lake to discover him leaving, claiming it was too gusty. I had the lake to myself, and I walked out onto it. The view here never disappoints--I could see the Seven Devils in the distance, and right above me, the Wallowas. 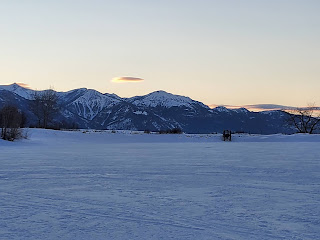 A few disconcerting slushy spots sent me on my way before too long, but not before a pink sunset ensued. I hadn't been all that motivated to drive out here, but it was worth it.

Later, my friend P and I got on a Zoom. We were both working from home, but he wore a tie while I had on a hoodie dress. We were over it, we agreed. We needed something to look forward to.

We decided it was time for a jail break. We pondered on October for a hiking trip. All around me friends are going to Hawaii, Mexico, Costa Rica. I'm not ready for such far-flung travel (who wants to skulk around Hawaii in a mask?) but closer destinations, we agreed, by then, should be okay. I am luckier than he is, living close to the wilderness. It has been a lifesaver in a year where nothing much has been great.

Sometimes I wake up feeling like every day is the same, work, try to fit exercise in, sleep, cram cram cram. "You have a hurry-up personality," a friend observes, and while I don't really like that about myself, I have to agree that it often feels like there just isn't enough time. Will that change once I no longer need to work? I don't know. All I know is that I am trying to squeeze out every second that I can. 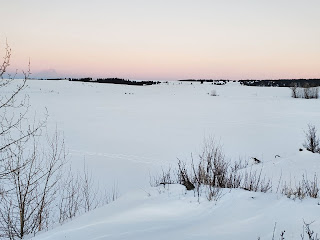