Not good at traveling anymore 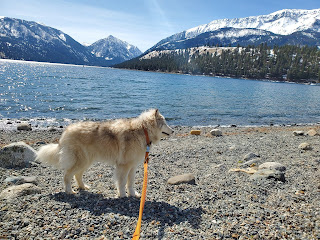 Camel called me from the trailhead. "Bring microspikes," he advised. A man in his group had been traversing ice and fell, breaking his leg. "Also, I'm standing in the forest freezing," he added. Previously he had enthused how light his pack was, saying he had really few clothes along due to the projected heat.

I stared at my pack. An overnighter or even a local backpacking trip, I'm good with. I keep stuff in a tote and can pack in minutes. There are a few additions; in Hells Canyon you always pack tecnu, for example. There are things I always camp with, including a puffy coat, a rain jacket even if the forecast calls for sun, and a buff, useful for pinch hitting as a hat, for an impromptu top, or a towel. But with projected hot temperatures and with being farther away, I was somehow incapable of packing.

It wasn't always this way. If you've been reading this blog for awhile, you know I section hiked the PCT over 8 years. This involved multiple flights, changing weather conditions and different needs for gear. I got pretty good at shakedowns and taking only what I needed. Now, after over a year of not traveling to hike, not so much.

I agonized, performing what my friend Ken calls panic packing. This involves confidently packing, then second guessing and unpacking. Repeat. There is nothing worse than being out for several days and not having something essential (ask Flash, who hiked Section A of the PCT with me in a time when it was supposed to be warm. She bought gloves in Mount Laguna). I've also panicked and overpacked, which is known as carrying your fears (ask Flash; on that same section I had rushed to REI to buy leggings, never mind that I already had a pair of long underwear. They'll get sweaty if I hike in them and then I won't be able to sleep warmly! I rationalized. Sweat was the least of our worries on that section).

Finally I had to give up and just go with it. However, at my destination I still pondered. Do I need a floppy sun hat? Collapsible bucket? Do I have too much food?

So yes, I am bad at traveling to hike now. And yes, I did travel. This is the only place I'll really talk about it for now since traveling invites plenty of judgment. But I'm staying safe, will quarantine after, and this is much needed.

I'll let you know if my panic packing was successful in a few days! And the picture up top is another reason I am bad at traveling. I can't stand to leave her!