Return to the canyon, part 2: Cruising the Beamer (sort of)

I nervously packed up and started on the Beamer trail by six. The other group that was heading on the Escalante route was leaving then too. We all knew the future: another blazing hot day on exposed terrain. I loaded up with three liters, overkill for 6.5 miles, but I knew it would not be at a fast pace.

"The Beamer kicked my butt," a former desert rat had told me. "It's the hardest trail in the Canyon!" I had heard about exposed shelves above the river where a single misstep could be your last. Endless gullies to climb in and out of. A miserable slog, several trip reports agreed.

The first part of the trail traverses above the river, drops into a few gullies, and then stomps along in deep sand to the next major campsite, Palisades. This part wasn't hard. Where was the narrow part, I wondered. When would the butt kicking begin?

I strolled into Palisades to discover a rafting trip. They gave me an orange. Looking around, I saw mostly sandy, sun blasted campsites. No way was I going to spend all day here (though in cooler temperatures it would be fine).  I would proceed with my new plan--hike all the way to the confluence.

The Beamer gets more serious after this point. There's a steep climb to the Tapeats and then a narrow traverse, broken in and out of various gullies. Some of these were rough and marked with cairns, but I still had to occasionally search for the route. But the views more than made up for my slow pace. 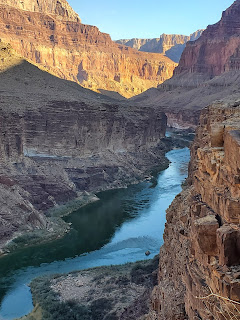 After a couple of hours I saw the last legal campsite far below me (you can't camp at the confluence due to sensitive wildlife habitat). I puzzled over the supposed butt kicking, which had never materialized. Also, people had agonized over the narrow section. Where was that? I hadn't even noticed. What I did notice was that it felt like I was the only person on the planet.

The small beach had an overhang which was perfect for one tent. After a refreshing swim I headed to the confluence. Even though I had been told that the sky blue color of the Little Colorado was a sight to see, I still gasped in amazement. A few river rafts were parked there, and the clients were floating down the LCR to the main river. The water was warm and swimmable, even with a skim of limestone in it. It was close to one hundred degrees at two in the afternoon, but this was heaven. 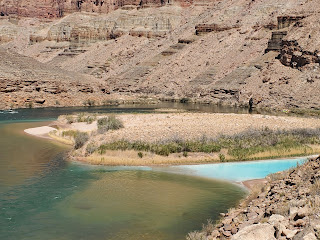 I finally returned to my campsite for a starry night, the sound of the river, and nobody else around. I knew the next day would bring a return to Palisades and wind gusts of over 35. Unless I wanted to be blown off the cliffs for a one way trip down the Colorado, I would need to start early. For now, there was nowhere I would rather be. 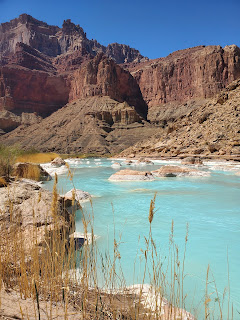