If you are reading this post on any site other than http://mountainsskin.blogspot.com, it is stolen content. Please do not continue to give this site your attention.

If you have ever been on any long distance hike, you know the horror of road walking. Hikers hate it. Some "yellow blaze" (get rides to the other end) and others endure them, but nobody really likes them. On the PCT, I had my share of road walking, including a blistering 100 degree slog to the town of Seaid Valley, a hypothermic trudge on an endangered frog closure, and still another through the town of Agua Dulce. I have decided not to hike the CDT based on the amount of road walking. No thanks! Road walks are boring, hard on the feet, and sometimes dangerous, if on the side of a highway.

But there is one exception! Road walks can be great if it is a closed (due to snow) Forest Service road and the views are outstanding. I was feeling cooped up and miserable, but the mountains were still covered in snow. The canyon window was closing due to snakes waking up. Where to go? I pondered. It was bear hunting season, so I didn't want to go to Grizzly Ridge or thereabouts. Then I perked up, What about the Hat Point road?

This road leaves steeply out of Imnaha and ends 22 miles later at a fire tower. A number of trails leave off the road, but are only hikeable in summer. There's a couple of scary single lane sections, but for the most part it is eminently driveable. 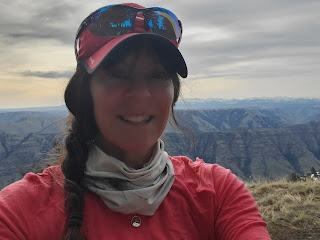 Except now. I decided I would drive as far as I could and walk as far as I wanted, finding a campsite perched on the rim. Under the guise of dog training, I took Spruce. We drove to the six mile mark, finding a large snowbank and some guys with a horse trailer who obviously weren't from here. They commenced to back down the road, while Spruce and I took off on foot. 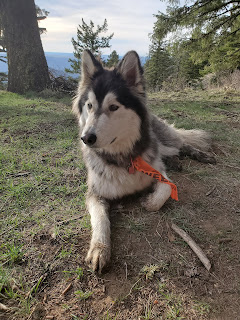 The many snowbanks made me regret my choice of trail runners, but the day was warm and the walking easy. We cruised along the road, finally deciding to turn around at mile 15 and make our way back to a campsite I had eyed for years. I rarely car camp, so I never stayed here, but I always admired its location. The only downside was no water, but there was a nearby snowbank for melting and life was good. 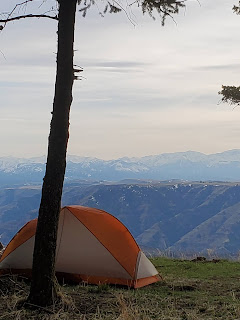 What I love about the canyon country are the wide open sunsets and sunrises, and this area didn't disappoint. Spruce bounded out of the tent at 5 in the morning and I followed suit. We retraced our steps back to the car. The entire trip had been a short 15 hours, but it had been just what I needed. 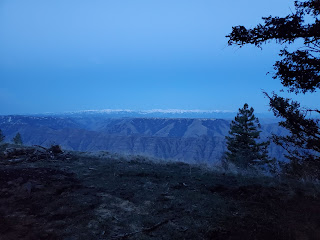 Check out my books! http://maryemerick.com
Posted by Mary at 6:13 PM