This is the summer of my discontent, when obligations keep me close to home. Nobody reads a blog to hear whining, so I will stop there, but after a Covid summer where we were so slammed with tourists that we couldn't go to the places we loved, and now this one, it's enough to drive an adventurous soul around the bend. How many summers do I have left? Hopefully many, but you never know.

So when I had half a day and part of the next one to bolt, I cast about for options. While the valley is dry (and, disturbingly, we have a 2000 acre fire going..in June!) the mountains are pretty snowbound. I didn't relish the idea of postholing through soft snow again. But where could I go? Snakes or snowere the options: Hells Canyon or the wilderness.

Because a condition of my escape was that I had to bring a dog, I couldn't choose snakes. There's a dog vaccine for snakes, but I hadn't gotten one for them, and I didn't want to get bitten by one either. Plus, the poison ivy is in full swing. The canyon window has closed shut with a definitive bang.

Snow it was. "You can definitely get up the North Fork of Big Sheep," J said. Why I chose to believe someone who hasn't been in the mountains for months (because of his ruptured Achilles) I don't know. Perhaps I chose to believe. As such I wore trail runners, telling myself that if I found snow, I would turn around.

I remembered the North Fork as being a beautiful basin lying under the McCully ridge, and I excitedly trotted up the trail. I had to park well before the trailhead, which should have told me something about the conditions, but I convinced myself that the trail was west facing and so would be melted out. The first mile went fine, and Ruby and I began to tackle the climb into Big Sheep. 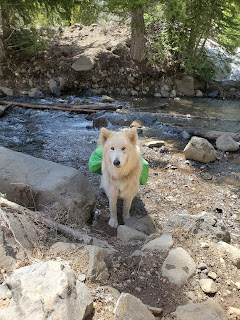 Almost immediately the trail disappeared under snow. My heart sank. But then, how bad could it be? (Asking this question nearly always leads to my downfall eventually. But still I ask.) I decided to forge onward, opening my Gaia app when I needed to. Mostly I try to navigate by knowledge; having worked on trails for a long time, I can usually feel where they should be. But when a trail dives into deep woods and snow is over six feet, it becomes more of a challenge. Nervousness began to creep in. I knew I wasn't lost, but not seeing a trail is always disconcerting.

And the snow wasn't the firm, easy kind. My feet sank deep into the snow, and I fell a few times. Still, I pressed on, gaining two thousand feet. I couldn't give up now. Surely the basin would be melted out., I thought, though I was starting to have my doubts.

After an hour of struggle I gained the basin. A solid white surface greeted me. Setting up the tent on snow would be okay, but then I would be stuck there; my feet were wet and it wasn't worth the exploration to keep postholing around. I would have to melt snow for water, which is tedious at best. I realized the phenomenon: I was tied to an outcome. 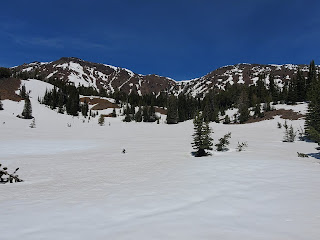 I had dreamed of sitting in sun-warmed grass, reading a book, a stream an easy stroll away. This was not the place. I would have to retreat. I should have picked snakes, I grumbled. At least I could hike a long ways without wet feet or postholing.

The dog bounded down the mountain, always picking the trail even though it was snow-covered. Here's a tip: when you have lost the trail, follow the dog. They know where it is. She didn't care that we were retreating, that we didn't camp in the basin. Be more like the dog, I told myself.

It's hard not to be tied to outcomes when you have very little adventure time. I fumed as we backtracked, the snow already getting icy and treacherous. This trail had very little camping opportunities, and I wasn't in the mood to day hike. I spend enough time at home as it is; I wanted to be out under the sky.

My mood improved as I came to the creek. Here I was, once again a short distance from the car. But it was warm, there was water nearby to wade in, and even a bridge to stretch on. It wasn't the outcome I had wanted, but it was the outcome I got. It was a lesson I need to keep learning, and we didn't get bitten by snakes, always a bonus. I guess I'll always choose snow. 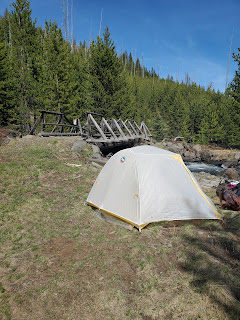