As we drive into the town where I was the most lonely, I texted my friend a picture of the high school mascot sign.

"Why, Mary, why?" he texted back. We both were there at the same time, suffering through life in a conservative town, where summers were scorching, winters freezing, and the dating pool shallow. To endure it, I used to escape to anywhere: north to backpack, west to visit friends, south to camp. I never, ever stayed home.

But my friends were riding a brutal bike race, and we were there to support them. We weren't a lot of support, basically watching them start, and then meeting them at one point to offer up Oreos and dried mangos. The race is remote and difficult, and it took them hours to complete. There was a 12 hour cut-off time. "Do you think I could do the 120 in twelve hours?" I asked J as we drove up in search of a trail to hike. He had done this race before, so he knew how hard it was, and how bad of a bike rider I am.

Since bike racing isn't on my list of ambitions, every other competitor was safe.

My friend T and I gathered up five dogs and went for a pleasant walk by the creek. We had a much better day than our suffering friends, whom we caught up with at the base of a big hill. They laughed as some of the 120 racers sped by-these people seemed like a separate species, especially as it was nearing 100 degrees. The race had drawn all kinds--the extreme athletes and the cruisers.

The next morning I went for a run past my old house. I almost didn't recognize it--had it really been so close to the neighbors'? And I had no memory of the neighbors. I must have known them, but was I gone so much that I never really did?

I ran up into Garland Acres, most likely much slower than I used to run in 2002. Though there are new houses, the town basically looks the same. Businesses have somehow hung on, and there is still the strange lack of movement from the residents. I think of the time I lived here as the Lost Years, but they taught me resilience, independence and strength.

As we drove through town on the way home, I noticed some changes. Yes, the Central Pastime bar was still there. The Thai restaurant where you'd better not show up hungry and also bring a deck of cards to pass the time. But there was a day spa, something that would have horrified the locals two decades ago. A couple of brewpubs. But there was also a I stand with the Hammonds sign (refer to the Bundy occupation if you are unaware) and the $39 a night motel. Some things never change.

Dear younger me, I thought. Hang in there, but don't run on so much pavement, your knees won't like you later. Don't date that firefighter, he will only move away and cause you heartbreak. Maybe stay home once in a while? Or not. Trust me on this, you will leave this place, and then you might come back, just for a visit. It will seem like twenty years went by in a blink. 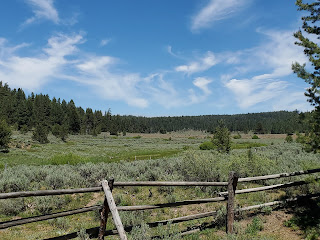