A werewolf at Echo Lake

I raced for Echo Lake. I had only a few hours of daylight and a steep climb ahead. A group of women stopped me. "Is the moon full tonight?" they asked.

In the years I have been on trail, I have gotten some strange questions, but I couldn't figure this one out. Either they were mistaking me for Google or I was a werewolf. Admitting ignorance, I plowed ahead.

Feeling pretty content with a 15 pound backpack, I tackled the 2200 foot climb. This was easy compared to how it was a few years ago--lots of downfall and route-finding. This lake, like all of the rest, has been discovered.

But not too much. I was the only one there when I arrived, and it looked like nobody else was coming. It was time for a victory swim. A cold victory swim. 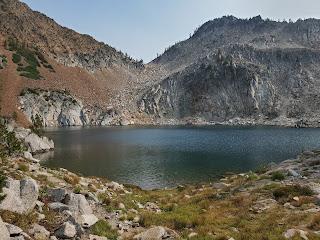 It's hard to ignore that fall is coming. Gone are the days of recklessly packing--now I bring my puffy coat, gloves, and down pants. There is a feeling that winter is in the air and hiking will soon be over for the season. There were a lot of places I didn't get to, but this was night #27 backpacking for the year, which is a lot for the limitations I had this summer. Almost a month of staying in a wild place, with whatever I had carried in. 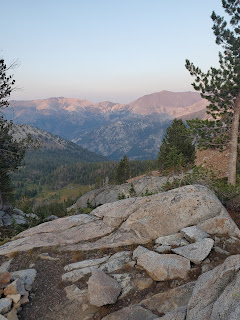 How to get through the winter? Luckily I like to ski, and I have a new winter hobby lined up. Making my own backpacking food! I can barely choke down any commercial food anymore, and it isn't all that good for you anyway. I watched with envy as my hiking partner consumed fancy meals that she had dehydrated. I've never done that, mostly because who has the time, and because I often don't bring a stove. But it's never good to get stuck in a rut, and maybe time to pay attention to what I'm eating (a tuna wrap doesn't always cut it).

The night was clear and cold. Stars came out. Eventually, an almost-full moon peeked out over the shoulder of the ridge. No werewolves appeared. OR DID THEY? I had to get back for a ten am conference call, so I packed in the dark and headed off by headlamp. The nights are getting noticeably longer; leaping out of the tent at 4 am no longer works as well as it did in July.

I reached the trailhead at 8:15, in enough time to make myself presentable on camera. At the meeting, people from the Washington Office talked about a project. I was the only one who knew: last night I had been wild. 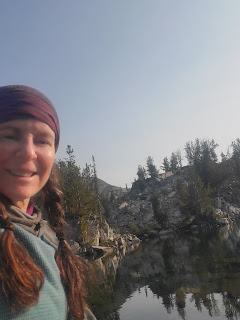 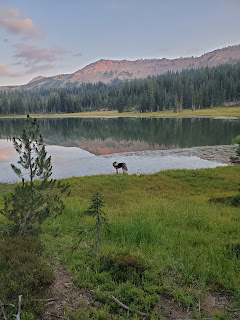 I admit: I've been spoiled by the PCT. It takes a lot to get lost on that trail. Plus there's an app that tells you where you are. Though I carried paper maps and attempted not to lose navigation skills, it was easy to default to the Guthook Guide.

So when I found myself searching for the trail to Little Storm Lake, I experienced a momentary panic. One minute I was on a trail, and the next I was floundering through a meadow. To make matters worse, hunters have established well-used trails that lead to their camps, and which are easy to mistake for the main trail.

It soon became obvious: hardly anyone uses the real trail. The reasons for this were clear. The main trail runs along a waterless ridge, avoiding the springs below. Some of it is pretty sketchy, with lots of exposure. And the trail stays far above the lake, necessitating a careful picking your way down.

The area itself is little visited. It begins with a 2200 foot climb over two miles to the site of an old fire lookout. Then you walk up and down an undulating ridge with the before mentioned challenges. It's definitely not for everyone, but I'm on a quest to visit all 73 named lakes in the wilderness, and with only ten to go, I wanted to check this one off. 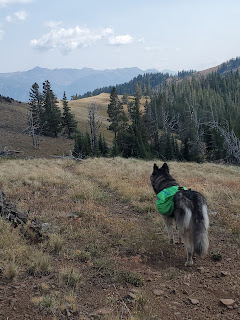 It was disconcerting to be off the main trail, but I figured out where it was and climbed back up to it. With all of the false leads, it took five hours to cover the ten miles to the lake and I gratefully set up my tent in time to capture the mountain reflections in the water.

The way out was much simpler and I didn't get diverted to hunter camps. I passed a couple gamely ascending to the lookout site. They didn't intend to go further. Those were the only people I saw in twenty-four hours.

I don't usually name the places I go, but I'm confident this one will remain remote and quiet. It presents enough obstacles to make a person think twice.

60 miles Around Mount Rainier: Wonderland and Beyond

I scrolled grimly through Recreation.gov as we drove the six hours to Mount Rainier National Park. The walk-up permits for the Wonderland Trail were disappearing. I could figure out a way to get halfway around the mountain, but then we were stuck. It was looking like our trip might be an exercise in futility.

Every spring the Wonderland goes on a lottery system, but we didn't get chosen for the early one, and the second lottery was ridiculous. Spaces vanished in seconds as people grabbed whatever they could, probably several people in one group and on multiple devices. We decided to risk the walk-up in an effort to hike somewhere different than our mountain range. It's been since 2019 (except for one Grand Canyon trip) that I have hiked anywhere else.

The ranger eyed us skeptically. "Have you ever hiked here before?" he asked. I didn't blame him: on our trek we saw obvious newbies and people who brought chairs, three sets of clothing, huge bottles of bug spray, and some who never made it to their assigned camp. He frowned at his computer. He couldn't give us a Wonderland permit, he said, but he could try something else. "Can you leave tonight?"

Could we hike ten miles starting at four? Yes, yes we could. We left with a cobbled together route that included part of the Wonderland and the Northern Loop, a somewhat wilder section of the park. Some of our days were short, but there were side trips we could take. After hastily throwing our packs together, we set foot on the Wonderland in a clockwise direction, heading for Mystic camp. 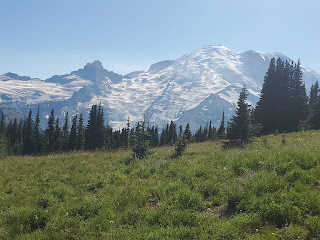 The air was remarkably smoke free and the mountain in our face as we made good time through the alpine country to camp. The campsites are nothing to write home about--mostly situated in forests, away from the nice features like lakes, but the next day we hiked up to the ranger patrol cabin to take in the view.

We hiked fourteen miles on Day 2, with a 3800 foot climb toward beautiful Spray Park, ending up in a developed campground next to lots of Wonderland travelers. It was a relief to escape back onto the trail. We took a side trip to a lake and fire lookout, and then descended three thousand feet to a delicious old growth forest and our third day's camp, Ipsut. This was once a drive-in camp but a flood destroyed the road, so it is quiet and unassuming now. 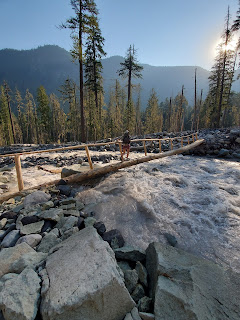 The fourth day we climbed from 2,200 feet up to somewhere in the low 5s, passing over a few sketchy bridges over the Carbon River. These bridges wash out frequently and it looked like this one was due for a disappearance soon. Because it was only five miles to this camp, we dropped our gear and day hiked up to a natural bridge and Windy Gap, returning to camp in late afternoon to find ourselves the only ones there. 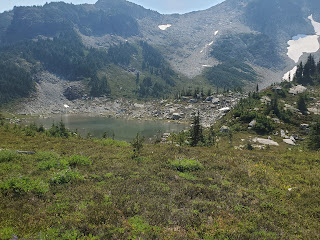 The following day began with a climb back to Windy Gap and a big descent to the White River, where another bridge looked tenuous at best. Braving that, we undertook a 1700 foot climb and a rolling ridgeline to our last camp, Berkeley Park. The smoke had started to roll in, and my hiking partner was tired of being hot and sweaty, so we were not going to try to extend the hike. (I think I have a lot more heat tolerance than most people. I've hiked with several who seem way more affected by heat than I am. I was hot but I could deal with it.)

The last day was short, but we soon found ourselves in hordes of day hikers, all reeking of bug spray (unnecessary) and deodorant (why). I couldn't get out of there fast enough. This is the downside of a national park--so many people.

In sum we hiked about 60 miles, ate a lot of food, and escaped our offices for one precious week. It was worth it. 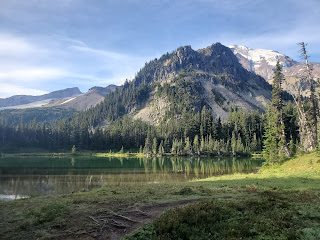 This post first appeared on http://mouontainsskin.blogspot.com. Any other location where it appears is not authorized and considered stolen.

I strolled through SeaTac, feeling overwhelmed. All of these people! The terminals were back to pre-Covid levels, and there was no escape. At least everyone is forced to wear masks, but there are a few renegades that try to get by with bandannas, which don't inspire much reassurance. I might be vaccinated, but I have lost any desire I might have had to be in crowds.

The last time I traveled for work was two years ago and it is likely that work travel will be curtailed again. I was determined to appreciate a week in a beautiful place.

The project was in California, and hiking time was limited. Besides, I surveyed the proliferation of poison oak along the trails and wasn't too excited about the prospect anyway. The hotel gym would have to do for exercise. 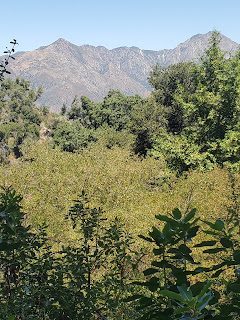 A thick layer of fog teased the land, keeping temperatures chilly. I watched surfers head out in wetsuits and tourists bundle up in coats.  But the farther up on into the forest we drove, the hotter the temperatures became, until we were in dusty, tawny landscapes with an entirely different type of people, who lived up there because they wanted to, despite the challenging access. I couldn't blame them. The longer this pandemic goes on, the more I want an escape route. 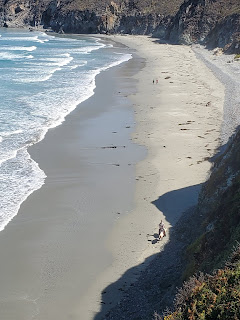 Still, it felt good to be out in the world, like a real person again. I continued my tour of fire helibases, stopping to see my friend Billy at one scorching site. I vowed to get my red card again next year--it has been hard to sit by and not help out in my own small way. My team and I ate at outside venues, and it was good to talk to other people besides the ones I have been bubbled with. Though the pandemic has probably been easier on me than on others, I didn't realize how starved I was for new and different locations and people.

The week flew by quickly and it was time to brave the airport again. I returned to my home town to find we were in a Substantial Risk category. Despite this, two huge events went on as planned. Things will never be normal again. But the landscape endures, at least so far. I sat in a climate change workshop, and someone wrote gloomily on the mentimeter: "We are all doomed." I hope that isn't true. 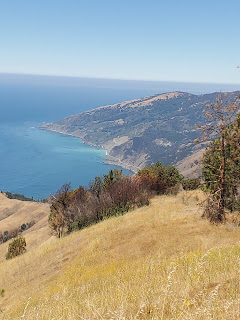