It was Labor Day weekend. Usually on a precious three day weekend, I can be found out in the wilderness and I unhappily realized that this was not going to happen. I had all three dogs, and they aren't quite ready for busy trails. In the past, it would have been fine, but we've been invaded by West Siders who snarl at seeing dogs on trails. My dogs are good: they don't bite, bark or jump on people, but they like to run along on trails and some people just don't like dogs, even if they aren't approaching.

To avoid confrontation, I've been sticking to running on less busy trails. But I really wanted to get out overnight. To complicate matters, it's bow hunting season, and trucks are everywhere. Even with bright harnesses and flagging, there's always the possibility a dog could be mistaken for a coyote. I puzzled over the map. Where to go?

Angela was going to Razz Lake, but it was on a busy trail and she had two dogs already. Whitney was going to a cabin in McCall, and she also had two dogs. The usual suspects were gathering at Indian Crossing, but there would be at least ten dogs and I didn't want to be dog police. Instead, I decided to go up to the ski hut. It's remote and steep enough that nobody would be there, with the added challenge of no water.

This hut belongs to the ski club, and even though I can't really ski to it (too steep for me), I snowshoe to it in winter. It's little more than a shack, but a beloved shack. In summer, though, once you get there you are pretty much stuck there, remnants of a long-since fire creating massive downfall that gets tiring to negotiate.

I hauled my ULA Catalyst backpack out of retirement and loaded it up with six liters. One dog carried two more liters and the others carried their food. Slowly, we inched up the Hill of Death and toward the shelter. The grass was golden; it was hot. Fall was coming but summer was still hanging on. 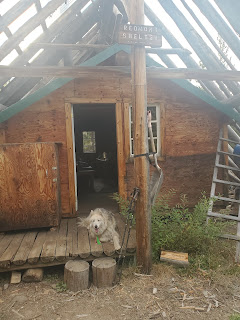 I haven't carried this much water since the PCT desert sections, and I was reminded of the many grueling days under a hot sun as we struggled on to a dry camp. I do miss those days and the camaraderie of the trail. It's been pretty isolating here for the past year and a half. I didn't realize how much those eight years of section hiking defined my existence. It's time to hike another long trail.

The hut was relatively undisturbed after the summer, a coffee cup not put away, a random tortilla in the weeds. The dogs settled in to a fruitless squirrel hunt while I split wood for the winter. We used to have this hut to ourselves, but during the long lockdown winter, people clamored for it. You have to be a ski club member to use it, but only a few people actually help maintain it. The huge stack of wood we had worked on last fall was gone.

I ended up with enough kindling to last for awhile, and read a book and watched the night fall from the cabin. In the morning, the puppies jumped on the bed to snuggle. What are we going to do today, they seemed to ask. 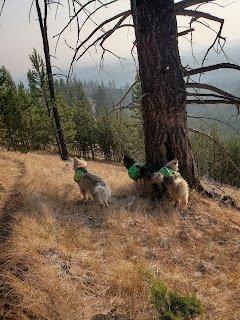 It wasn't an epic adventure. They are happy to go anywhere, even if it's waterless and not all that scenic. How interesting it would be to be a dog, put in a car and brought somewhere, following restless humans into the woods. But dogs always make the best of it, and even though I wasn't where I wanted to be, I would too.

For the rest of the weekend, I did something I never do. I...relaxed. I took naps in a hammock! I watched movies! It was deeply weird, but nice not to be on a schedule. The dogs and I ran up deserted roads and jumped in the lake. It was epic, in its own way.