L and I drove optimistically to the trailhead. I hadn't seen her in two years, courtesy of Covid, so we were chatting away as we approached the end of the rough road. We had already passed a few cars parked inexplicably along the side of the road, and a tent parked so close that our tires came within inches of where someone's sleeping head would be. All of this should have clued us in, but we still gasped in horror as the parking lot came into view.

Generally, this remote trailhead on a busy day would have about four cars. Today, at least twenty were packed in there. We exchanged looks of disbelief. It didn't look like my truck would fit, but we were locals, we could do it! Leaving the horse trailer plenty of room to get out, I backed precariously to a spot that probably was not really a spot, and we began our day hike.

The first hiker we encountered was headed out, bearing an external frame pack and a scowl. He ignored our greeting. Clearly he was not having a good day. We then saw a hunter (archery season is upon us) and a few backpackers, both headed in and headed out. A couple was doing a 14 mile loop, and there were also some day hikers. Finally I could stand it no longer and asked one group how they had heard about the trail.

"There was an article in the Eugene Register Guard," they said.

Boom, there it was. Write about something in a high circulation format, and people come.

On the positive side, it is always good to see people enjoying the outdoors. Everyone we saw, except for Grouchy Guy, was having a good time. We could see why. The lake was beautiful in the fall, the shrubs turning yellow and red. This is the best time of year in the mountains (it's supposed to snow this weekend). 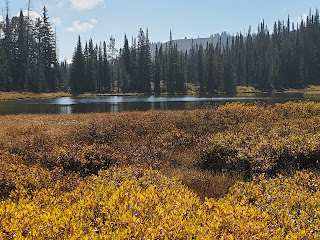 We debated going further, but decided against it. The day was perfect enough already. When we arrived back at the trailhead, someone with a horse trailer had given up and decided to park in the middle of the lot, effectively causing difficulty to others. The tent was still pitched in the road, the occupants apparently deciding to risk their lives. It was hard to get too mad at all the people. Winter will be here soon, and everyone will go away. 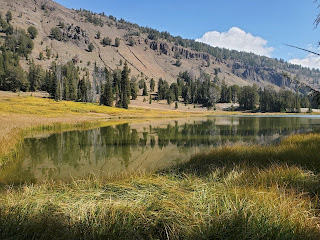 I don't often enjoy day hikes as much as I do backpacking, but this one, even with sharing the trail, was the perfect length and the perfect company. We talked about the date, September 11, and where we were when we heard (L was at these lakes) and how life had changed since then. It was the right place to be on this anniversary. 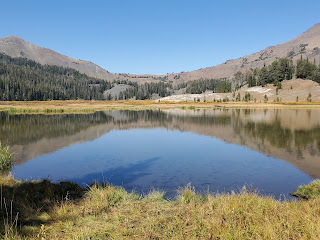