I trudged toward Aneroid Lake, a destination chosen due to the trailhead proximity to my house (I name it here because it is well known and there are durable campsites). This would be another leave-work-early-get-up-early trip, less than 24 hours in the wilderness, but better than nothing. Because it was a weekday, nobody was coming with me. That was fine: I planned to hike as fast as I could, so that I could get there in time to visit another, higher lake. 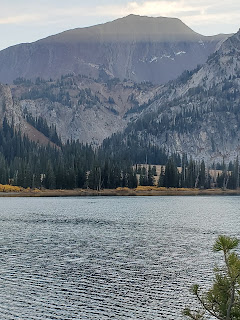 A few dejected hunters passed me going down, but I saw nobody on the entire trail. I had the campsites to myself, so of course I picked the best one: up in the rocks, with a view of the lake. Camp chores done, I bolted for the higher lake. This one is off trail, but only a few miles away. Once, I saw a wolf there.

As I trekked through the basin before the second climb, a hiker came from the other direction. He paused to ask me if the trail he had seen up above would pose a problem for his friend, who was coming down without a map. I reassured him that it was a dead end trail to a sign, and it would be easy to figure out. After twelve years of running around in these mountains, I know them pretty well.

We fell into a conversation. He was from Poland, and had retired eight years ago. "The best eight years of my life!" he boomed.  "I just live simply and don't buy anything."

Good advice, I said. I really don't buy much anyway.
Then he said:  "I'm really only happy out here. Being home is all right, but..."

I can relate. It's not that I'm unhappy at home. I'm content. But being out in the wilderness for days on end, not just for a little bit, is where I am the happiest. We parted, saying we would see each other at the lake, and I headed for my destination.

The small lake was windswept and cold. It wasn't a place to linger. I went back down to Aneroid to see if my friend who is a caretaker of the private cabins was around. The cabin was all shuttered up. It was time to admit: winter was here. 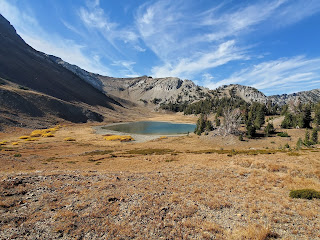 It's been a hard summer, but a good one for wilderness. I've re-learned what I've always known: do it all while you can. For me, that doesn't mean leaving my job security to live in a van, but it does mean to wander my beloved mountains as long as I can still do it.

The Polish hiker and friend were nowhere to be seen, and the next morning I got up in the frost to quickly pack up and return to society. I rolled in to a meeting still in my hiking clothes (luckily on videoconference, it's harder to tell). I had thought this was the last overnight trip: it was October, after all. But I found myself checking the weather. Maybe it would hold out. Maybe I could still escape while I still could. 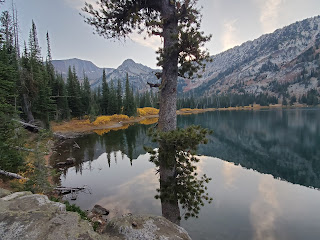 do you talk to people on the trail? What kind of wisdom have people imparted?

(probably the weirdest encounter was with a man carrying two duffel bags. He said they were full of Clif Bars, and he wanted to make sure he got an arm workout while he was backpacking.)